The influence of topography - 3 - historical perspectives

As mentionned in the introduction of the first post of this series, various cities are located in regions whose geography provides military, commercial or political advantages. Québec City, which was founded by French settlers at a narrowing of the Saint Lawrence River close to an old Iroquois village, is no stranger to this rule.

This post illustrates the impact of the city’s terrain on its military and defensive prominence. It also illustrates the importance of elevation on some defining moments in its history, namely the Seven Years’ War between colonial France and Britain. 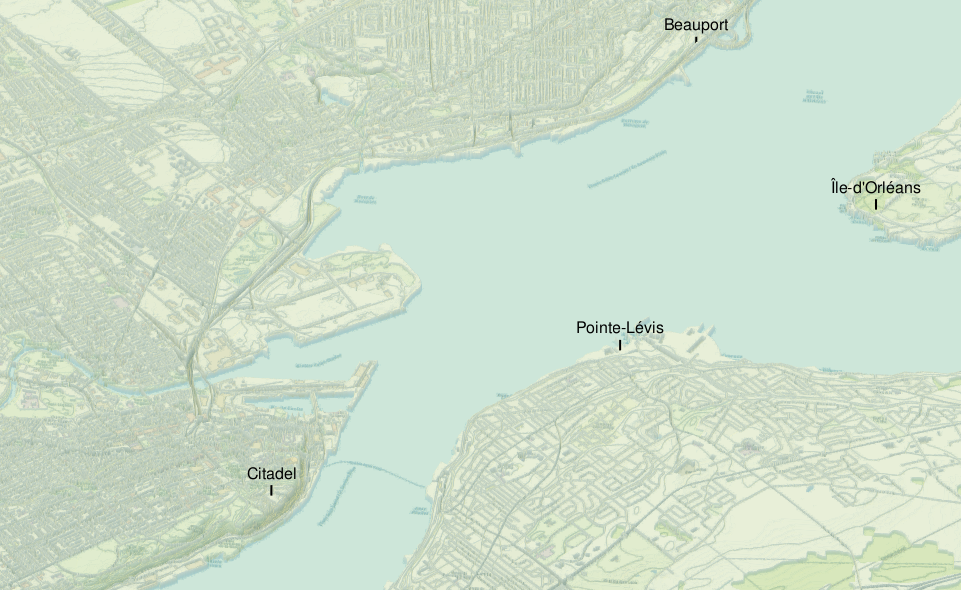 The following figure reveals that the old city fortifications lie on a cliff facing both Saint-Charles and Saint Lawrence rivers. The citadel is located on the highest point directly facing the Saint Lawrence. 1 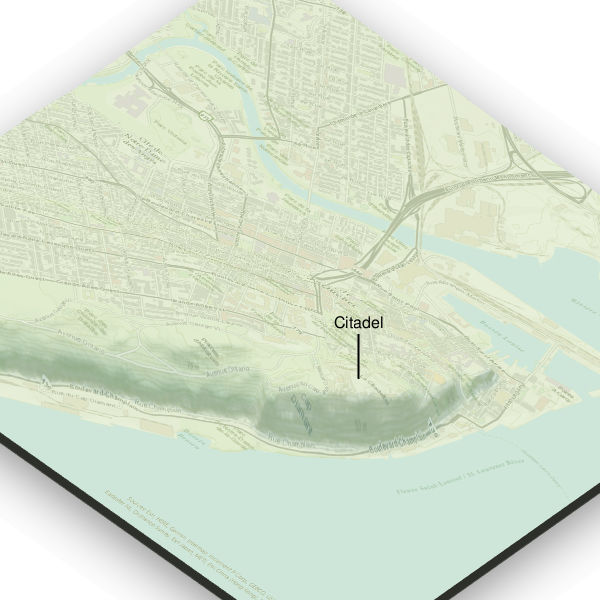 Location of the citadel on the 3D rayshaded map 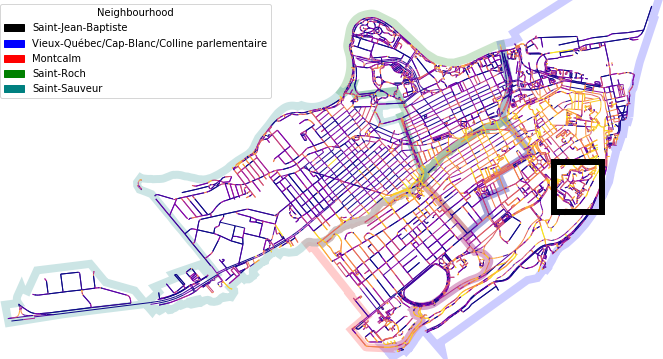 Because of its strategic importance, the city of Québec was the scene of various battles between French and British troops during the Seven Years’ War. The most important of these conflicts is undoubtebly the battle of the plains of Abraham, in September 1759. This fight would decisively seal the fate of the North American French colonies and still olds an important part in the Québec collective psyche.

Elevation played a quitessential role in this battle2. By choosing to land at the foot of a 50 meter cliff near Anse aux foulons (also known as Wolfe’s Landing), General Wolfe (in red in the following map) caught General Montcalm and the rest of the French forces by surprise. Indeed, after months of siege, skirmishes and one failed British landing close to the Montmontrency falls, Montcalm (in blue) had stationed his troops downstream of the citadel near Beauport. He also feared an attack from upstream after the fall of Pointe-Lévis allowed the British navy to navigate further up the Saint Lawrence. The general had therefore ordered his general Bougainville (in yellow) to take 3000 of his troops to the mouth of the Cap-Rouge River at the other end of the Québec promontory.

Topographic map of the Battle of the plais of Abraham. Troop mouvement: Bougainville in yellow, Wolfe in red and Montcalm in blue. 3

Montcalm considered that the risk of a British landing near Anse aux foulons was unlikely due to the steepness of the cliff as well as the fact that British troops would be cut off from an easy retreat. Considering the considerable steepness of the contemporary asphalted road (see the picture below), it is not hard to see why the general would evaluate the ascent as unlikely. 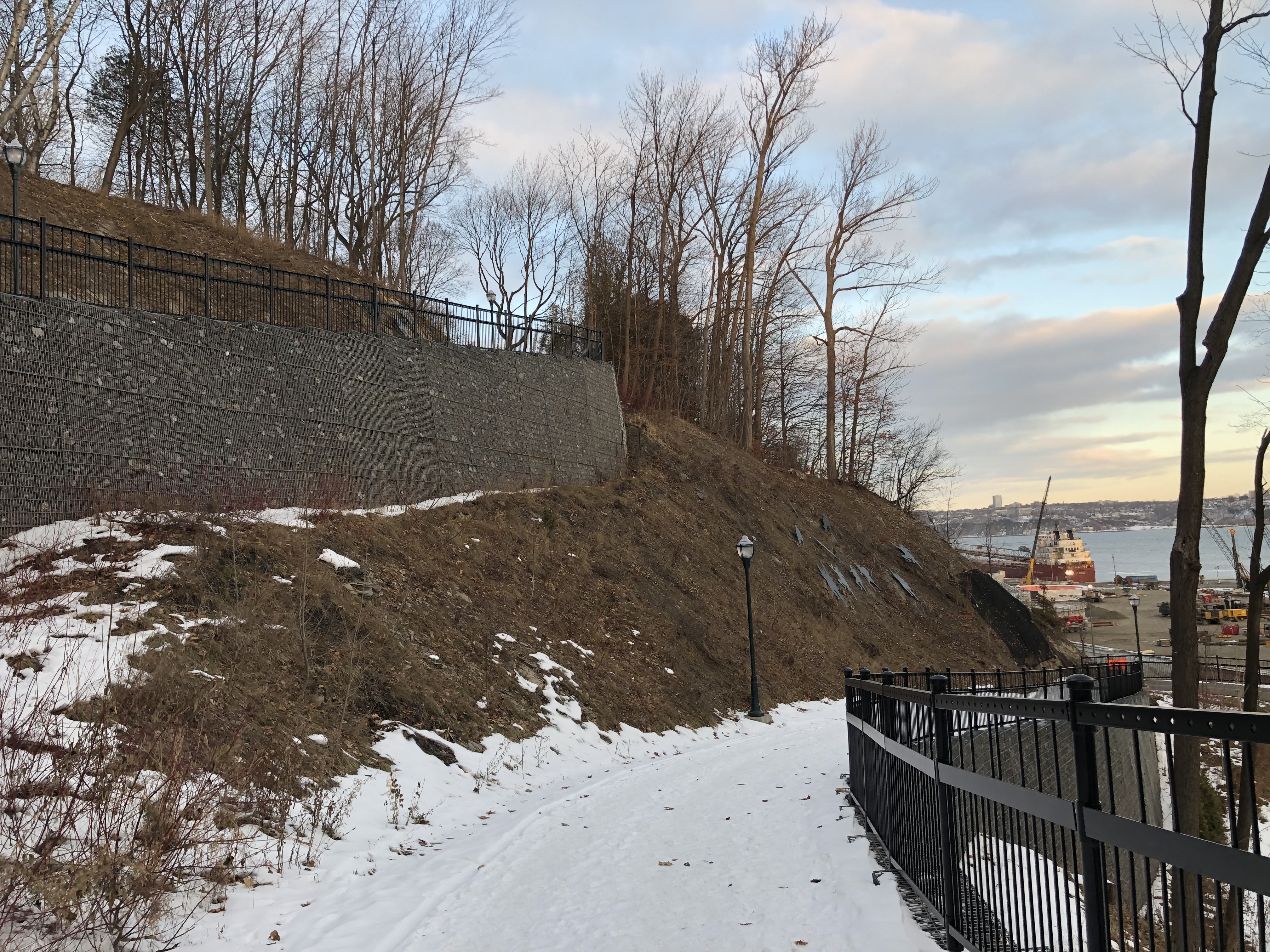 The interpretative trail created by the National Battlefields Commission in the Plains of Abraham parc reenacts the British ascent.

The cliff and the small path leading up the hill were therefore poorly defended and easily overtaken by a British brigade. The rest of the attacking forces were then free to climb the cliff and engage the remaining French forces on the lands of a French farmer named Abraham.

These open flat lands allowed Wolfe to use standard military tactics used in European warfare at the time. After having successfully drawn out the French, the British army managed to defeat the French forces and kill Montcalm before Bougainville’s column could travel the close to 12 kilometers between the battleground and Cap-Rouge. When he reached the plains, the French forces were already retreating and would eventually abandon the citadel.

The battle proved decisive for the North American French colonies. French forces failed to regain control of the city during the battle of Sainte-Foy in 1760 and the colony remained British until eventually forming one of the founding provinces of Canada.

Even today, the battle has important symbolical importance. As can be seen from the following map, it has led to the creation of a federal commision as well as one of the largest parcs in the city: the Battlefields parc. Covering 100 hectares, the parcs makes up sizeable portions of the Colline parlementaire and Montcalm neighbourhoods. The parc des Braves, located on the site of an old strategic mill used during the Battle of Sainte-Foy, also commemorates the determination of both British and French forces during the war.

Of the roughly 50 streets within the epinomous Montcalm neighbourhood, roughly 25% are named after a place or a historical figure related to the Battle of Sainte-Foy or the Plains of Abraham. These streets are highlighted in blue in the map above. The details of the origin of each name is taken from the official city list of public places names (in French).

The Battlefileds parc and the Montcalm neighbourhood are a testament to the enduring tension between British and French influence in Québec. They also highlight some aspects of the sensitive nationalist question which has teinted the political debate in Québec for the last 40 years.

For instance, the map above shows the Wolfe monument in green. This obelisk was destroyed by the FLQ in 1963 along with a statue of the Queen Victoria. Although the parc is a property of the federal goverment since 1910, it also hosts the large Saint-Jean-Baptiste (Québec national holiday) festivites each year on June 24. 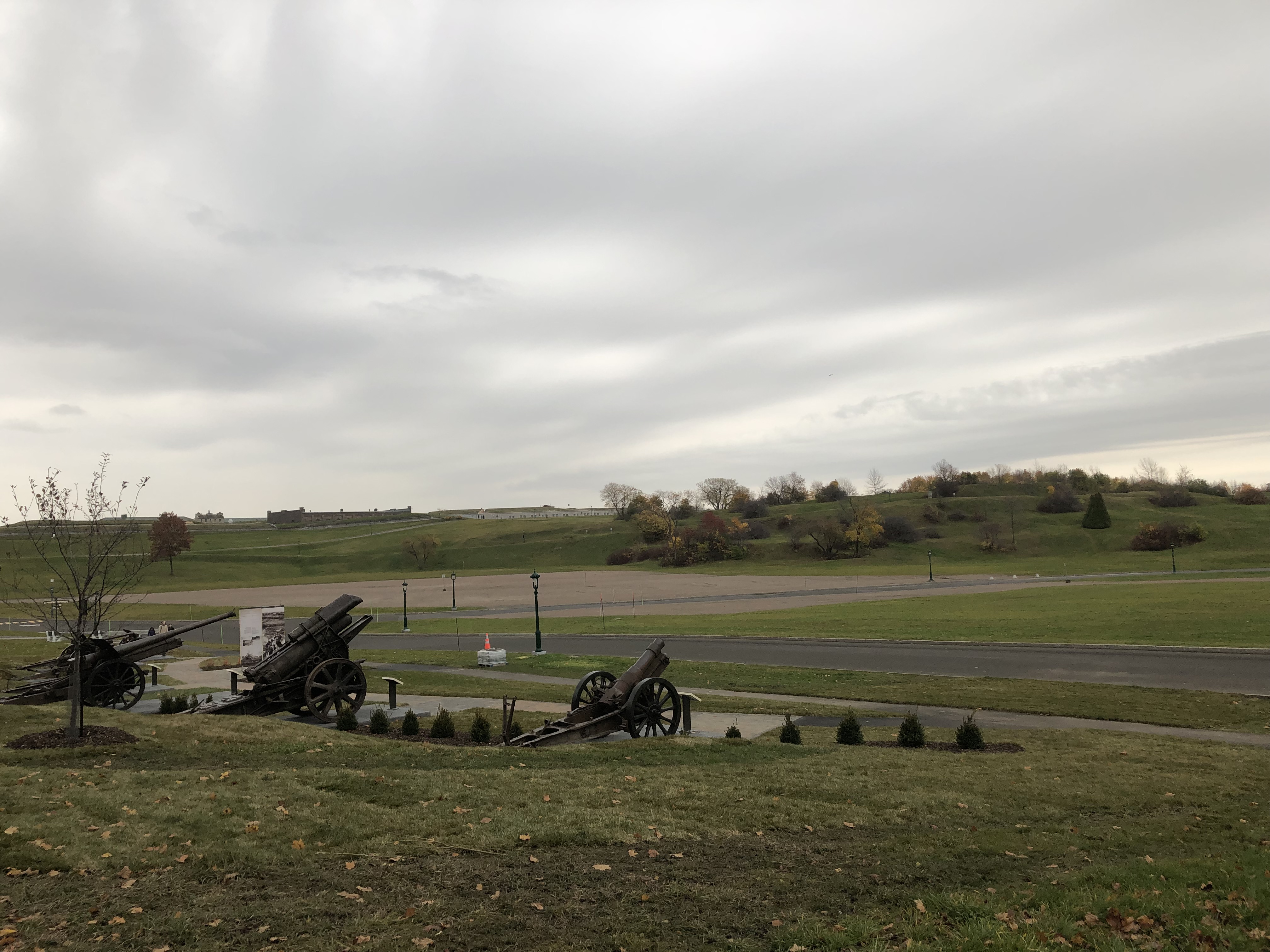 Plains of Abraham with the citadel in background. Nice place for a picnic, a gunfight or a celebration of Québec nationalism.

As a final though, the authorities apparently made a conscious effort to honour the beligerents from both sides of the 7 years’ war. The Avenue de Bougainville runs parallel to Avenue Murray and Moncton. The central entry into the plains is named Wolfe-Montcalm and the reference to the “Braves” refers to both French and British troops. The commemorative plaques in the Braves parc, shown in the picture below, mention that the parc was inaugurated on the grounds of reconciliation. 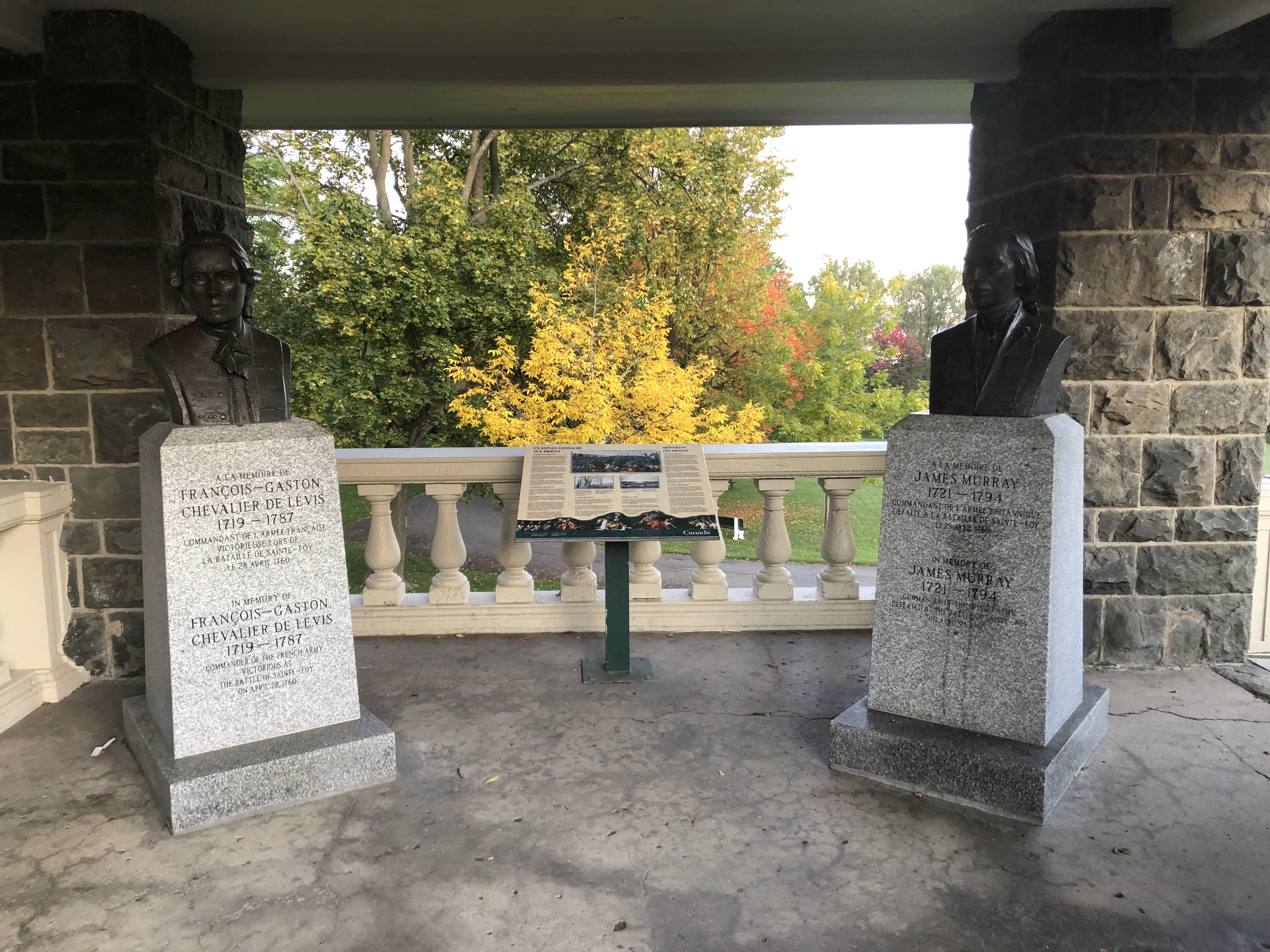 Old foes commemorated: Murray and De Lévis side by side

Elevation played a pivotal role on the history of Québec City and French presence in North America. Had it not been for the cliffs of the Québec Promontory overlooking the Saint Lawrence, the Seven Years’ War could have taken a different turn. The battle of the plains of Abraham continues to resonate in the collective unconcious of the inhabitants of the city and beyond.