The influence of topography - 4 - water

Topography has significant impact on the hydrology of a region. The terrain shapes the path and flow of rivers as they make their way from their source in the mountains to the sea. A quick glance at the following map illustrates that even without explicitely mapping hydrology, we can still make out the approximate location of lakes and rivers simply by considering the slope of the terrain.

Québec City topographic map - with and without hydrography

Just like terrain and elevation, hydrology plays a fundamental role in the development of cities. Water is a vital ressource for human activity, industry and as a means of transportation. Major urban waterways like the Hudson in New York, the Chicago River in Chicago and the Lachine Canal in Montréal all share similar importance and characteristics.

This post explores the impact of elevation on one of the most important water bodies in Québec City: the Saint-Charles River. It also details its impact on the past history and future developement of the region.

The Saint-Charles River takes its source in Lake Saint-Charles in the Laurentian mountains and then flows down towards downtown and eventually reaches the Saint Lawrence. Together with its two main tributaries, the Nelson and Yellow Rivers, the Saint-Charles represents the main source of water intake for the city with close to 55% of residents supplied by its water. The main waterway passes through 11 of the 35 neighbourhoods of the city while that number increases to 13 if we also consider the Nelson and Yellow Rivers.

The following interactive map highlights the importance of the Saint-Charles River for Québec city. Overlaying neighbourhood data on top of the catchment polygon, we see that almost all neighbourhoods lie within the Saint-Charles drainage bassin, which means a large proportion of surface water eventually ends up in the river.

In addition to its actual importance as a major water intake, the river has played a defining role in all periods of the city’s development. Its importance even extends to Québec and Canada as a whole.

In precolonial times, the river was already extensively used by the native Huron-Wendat to access large hunting and fishing grounds. During his first visit to the continent, Jacques-Cartier and his men hibernated on its banks near the mouth of the now burried rivière Lairet in 1535. Today, the site is a Canadian historic site.

In the early 19th century, the river first attracted lumber and subsequently shipbuilding activities. These industries contributed to the development of working-class neighbourhoods like Saint-Roch, Saint-Sauveur and Limoilou.

This period was followed by an intensive industrialization phase where the river became vital for water-intensive industries like meat processing, pulp and paper as well as leather production, which used it as an open sewer. Although many of these industries have disapeared, some such as the Birch paper company can still be seen on the banks of the river.

The following historical map highlights the importance of the river on the developement of the city 1. Comparing the historical limits of the rivers with the contemporary polygons in blue, it namely becomes clear that the Saint-Charles estuary was indeed two times larger at the time of the founding of the city as it is now. The size of the mouth of the river was greatly reduced by industrial and port activities which reclaimed large swaths of land. 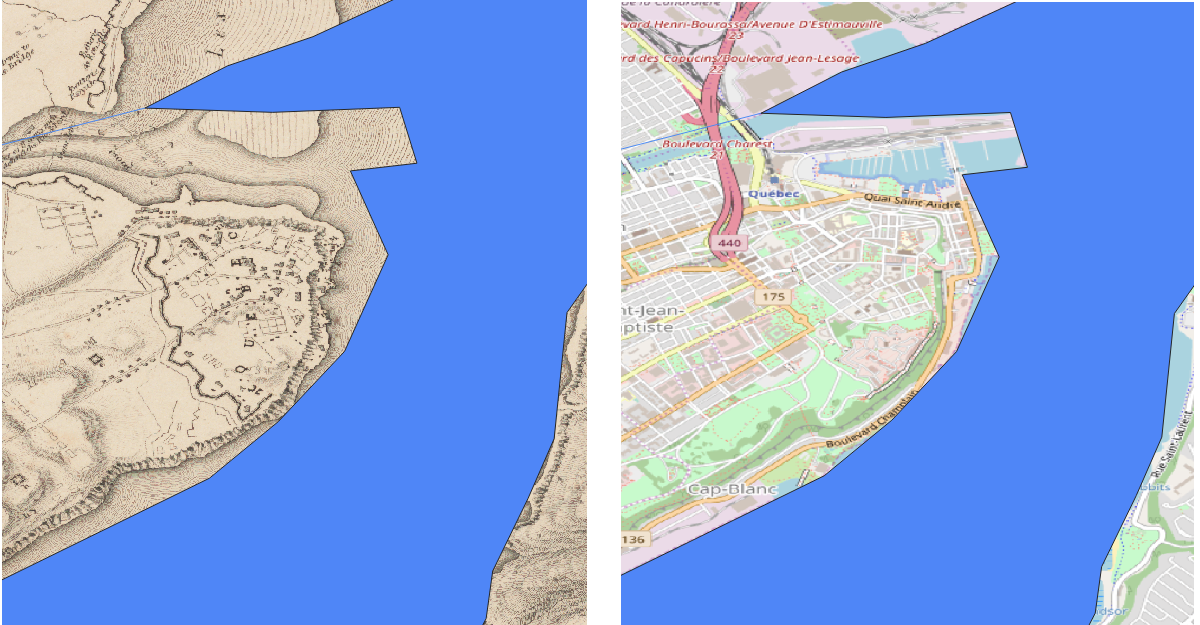 During the 20th century, the river continued to be heavily exploited by industries and remained extremelly polluted. In an effort to sanitize the waterway, authorities cementerd its shores, which failed to solve the problem and almost killed off all remaining aquatic life.

After the rise of the suburbs and the car in the 50’s and 60’s, highways and boulevards were built to transport thousands of workers to parliament hill. This major urban planning project namely led to the creation of the Laurentian highway. In order to create a new entry point into downtown, engineers dried up a meander of the river and then used it as the foundation for the new road. The old path of the Saint-Charles is shown in the following interactive map.

In the 90’s, the city dramatically changed its policy and chose to rehabilitate the river by removing the concrete, planting aquating plants and trees as well as developing a 32 km parc for cyclist and pedestrians along its shores. These efforts improved access to the waterway while preserving a vital natural wetland for fauna and flora in the heart of the city.

After being battered by years of unregulated industrial activity, the river remains too poluted for activites like swimming and even kayaking. Despite the sucess of recent renaturalisation initiatives, it continues to suffer from poor water quality and contamination by heavy metals like copper and mercury. Since old gutters still empty into the river during heavy rains, it is also plagued by a dangerously high concentrations of feacal colliforms.

These problems are exacerbated by the small flow of its industrialized portion, which prevents it from flushing pollutants downstream efficiently. The following figure illustrates that elevation and grade both decrease as the water leaves the Saint-Charles Lake in the upper left towards the exit point at the Saint Lawrence in the bottom right corner.

The following quiver plot further highlights the impact of topography. While the high flow portion between Wendake and Duberger-Les Saules has small falls with a canyon, the last portion of the river takes a deep bend towards the east and slowly meanders through the valley 2.

Elevation gradient - Saint Charles River with different sections. The figure shows elevation where lighter colors represent higher regions and arrows indicate the elevation gradient. The gradient represents the direction of maximal ascent at each pixel of the image.

In fact, the river has a relatively small slope overall. For reference, consider the Montmorency River and its famous falls. The following plot reveals that the distribution of the gradient norm is shifted to the right compared with the Saint-Charles. 3 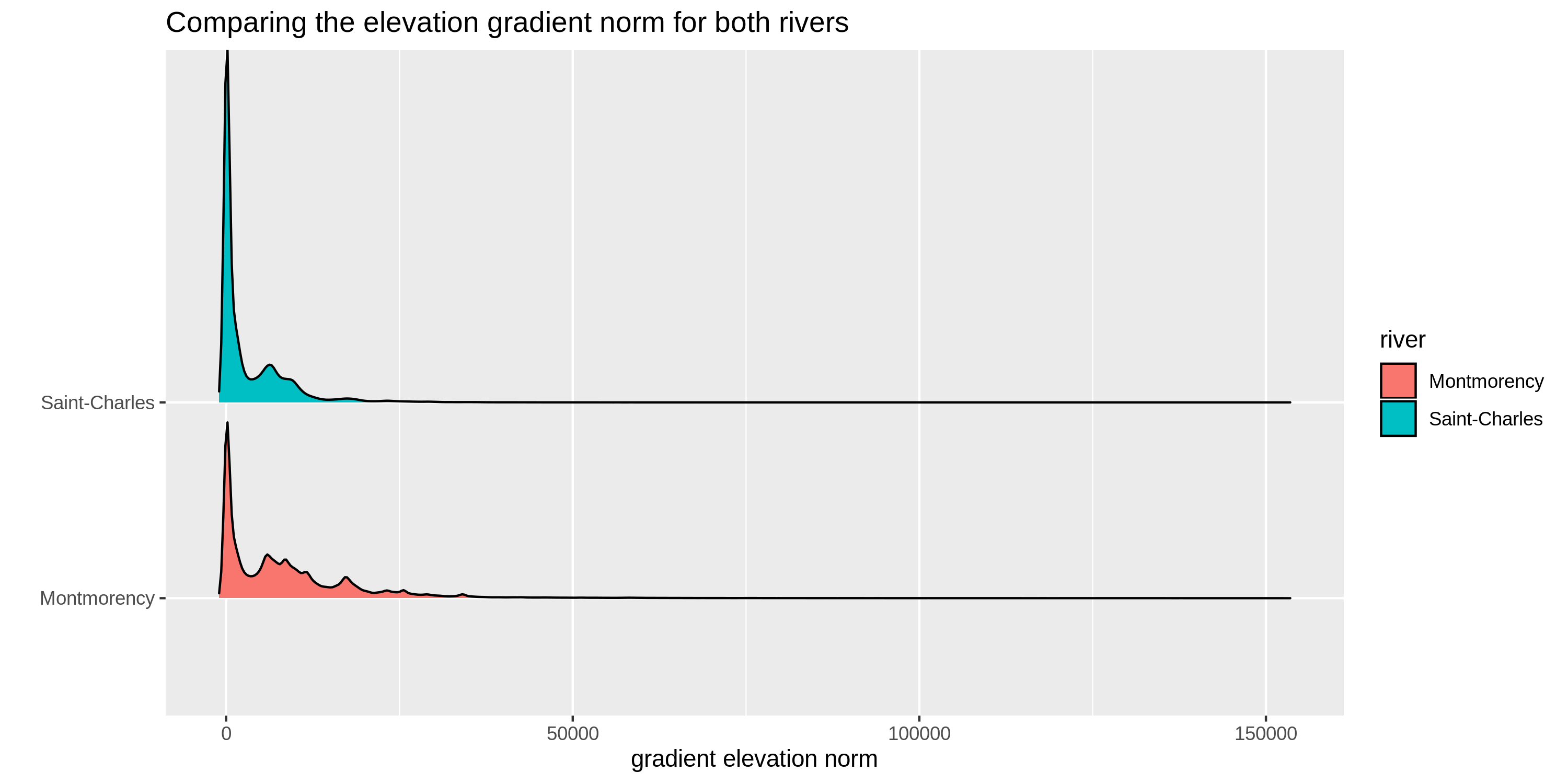 Elevation gradient norm for Saint Charles and Montmorency Rivers. Both rasters consider a buffer of equal size around the river.

The construction of the Samsom dam at the mouth of the river in the 70’s has further reduced its flow which in turn has also created considerable sedimentation. Prior to the construction of the structure, the Saint Lawrence entered the estuary during high tides and brought back sediments as it receded. Although the structure reduces the risk of flooding, the flat urbanized portion of the Saint-Charles now dries up during a large portion of the year. As shown in the picture below, this occurs even in the fall when inflows from runoff water are high.

Today, opening the valves of the dam remains questionable due to fears of contaminating the Saint Lawrence. Multidisciplinary initiatives led by the INRS involving various political and scientifc actors are underway to study the phenomenon and try to restore the vitality of the river.

The Saint-Charles River has played a central role in the history of Québec City. From precolonial times to the contemporary period, the river has influenced human settlements and shaped entire neighbourhoods. In turn, terrain and human activity have considerably altered its face.

In spite of numerous hardships, the river shows extraordinary resilience. Renaturalisation efforts may help it regain its lost vitality and improve the quality of life for riparian population. Decontamination and access to this waterway will become even more important as the city’s population continues to grow and urban pressures increase.