As laid out in the previous post, achieving the 15-minute city will not be a trivial task. Ensuring greater accessibility to amenities by active or public transport will namely be difficult for the many cities that have increased their dependence on the automobile as they have expanded.

However, many neighbourhoods are proving that it is possible to reverse this tendency. Even in car-centric North-American cities like Quebec City, it is possible to find liveable areas with good access to proximity services like groceries.

A quick overview of Quebec and Montreal

Considering the average distance to the nearest grocery store in Montreal, we immediately notice a large discrepancy between suburban and urban areas. The low-density West-Island takes the last position in terms of grocery accessibility while dense urban areas like the Plateau favourably position themselves. 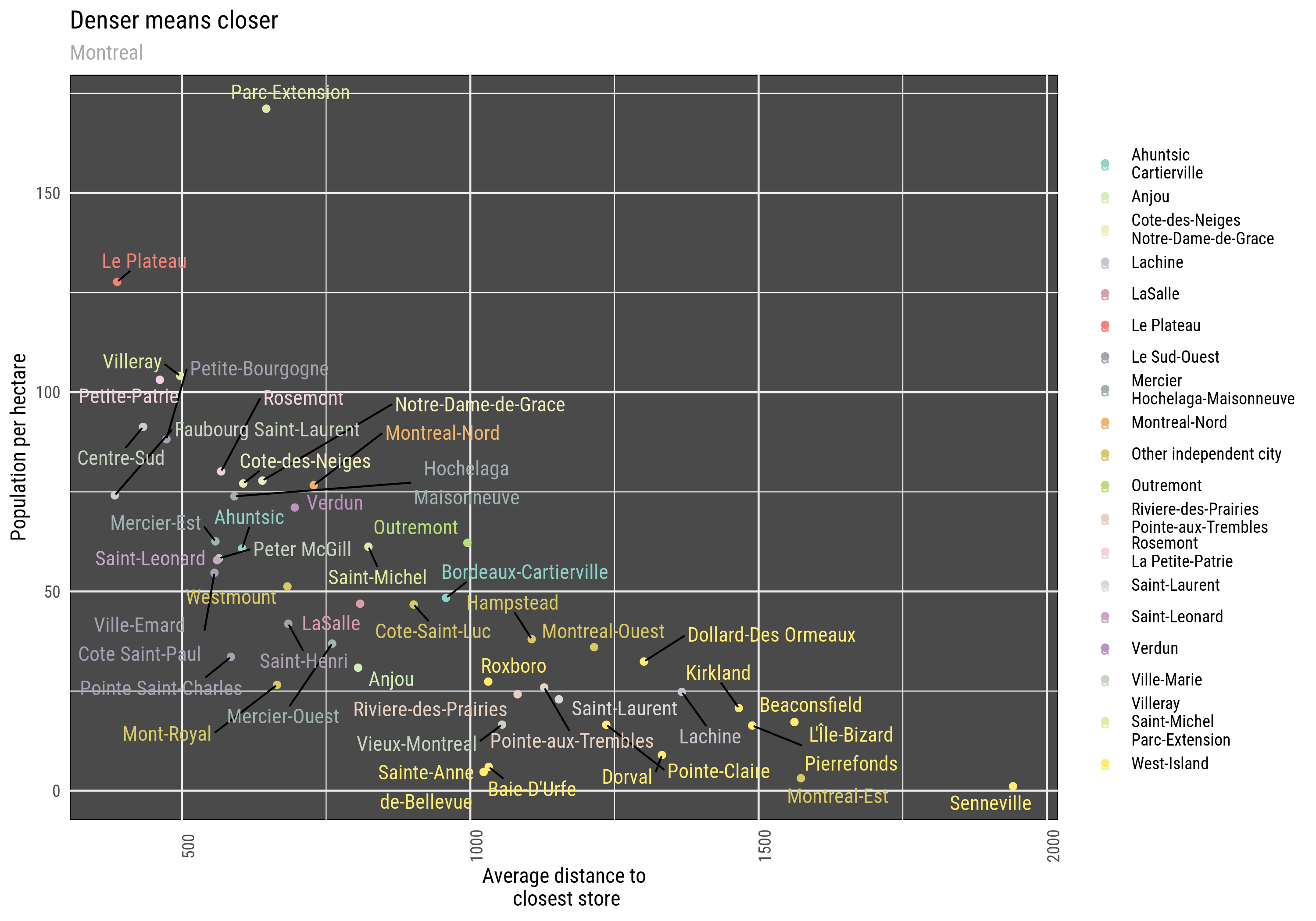 Perhaps unexpectedly, Quebec city has many neighbourhoods that compare favourably with those in Montreal. Citizens in the historical la Cite borough are namely all within 500 meters of the nearest grocery store on average. The main exception is the Vieux-Quebec, which has witnessed considerable population stagnation over the past decades. 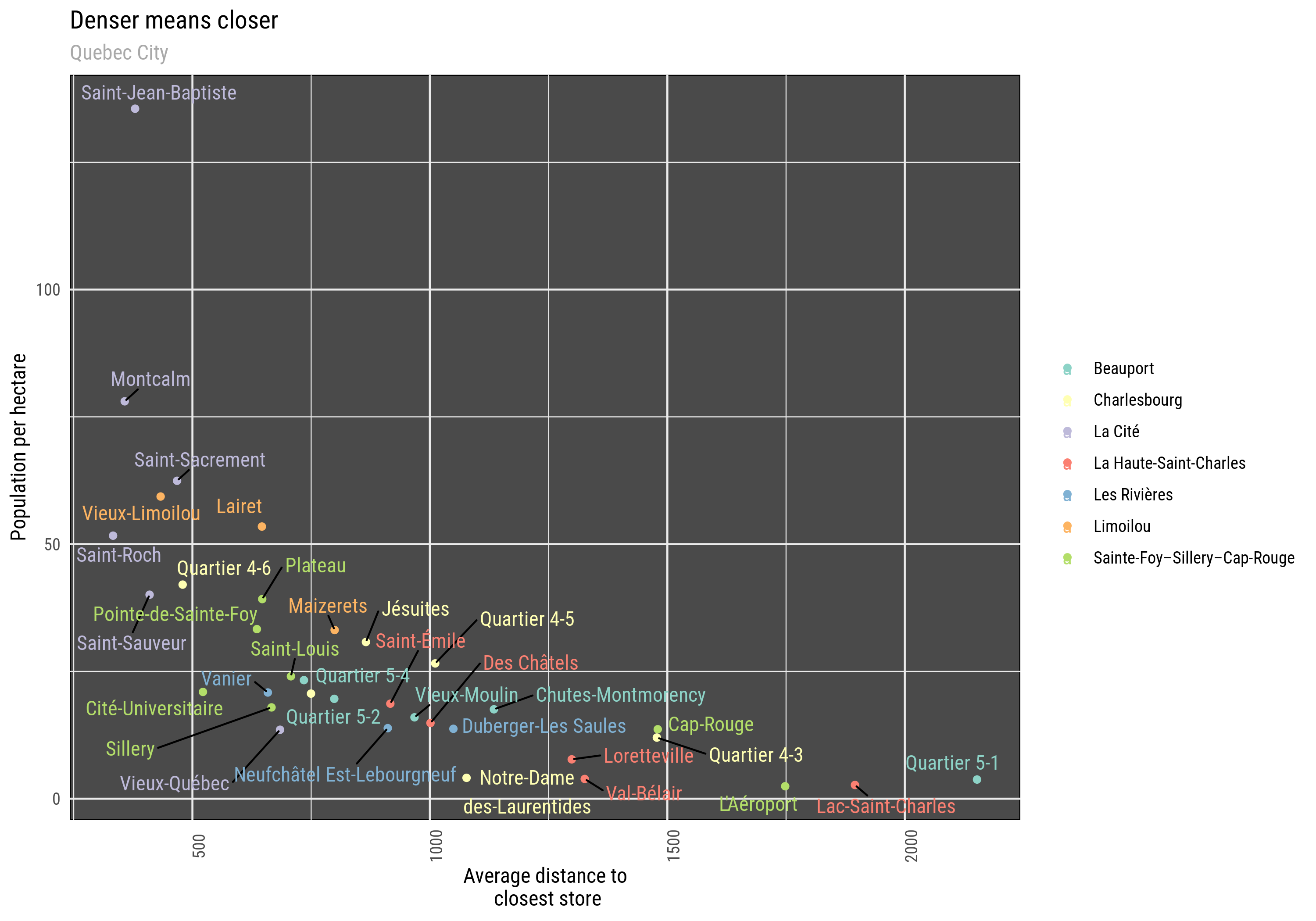 Considering the cumulative population distribution by distance paints a similar picture to the averages above. However, it also reveals some variance within neighbourhoods as well as the presence of large outliers, most notably in Ile-Bizard/Pierrefonds. 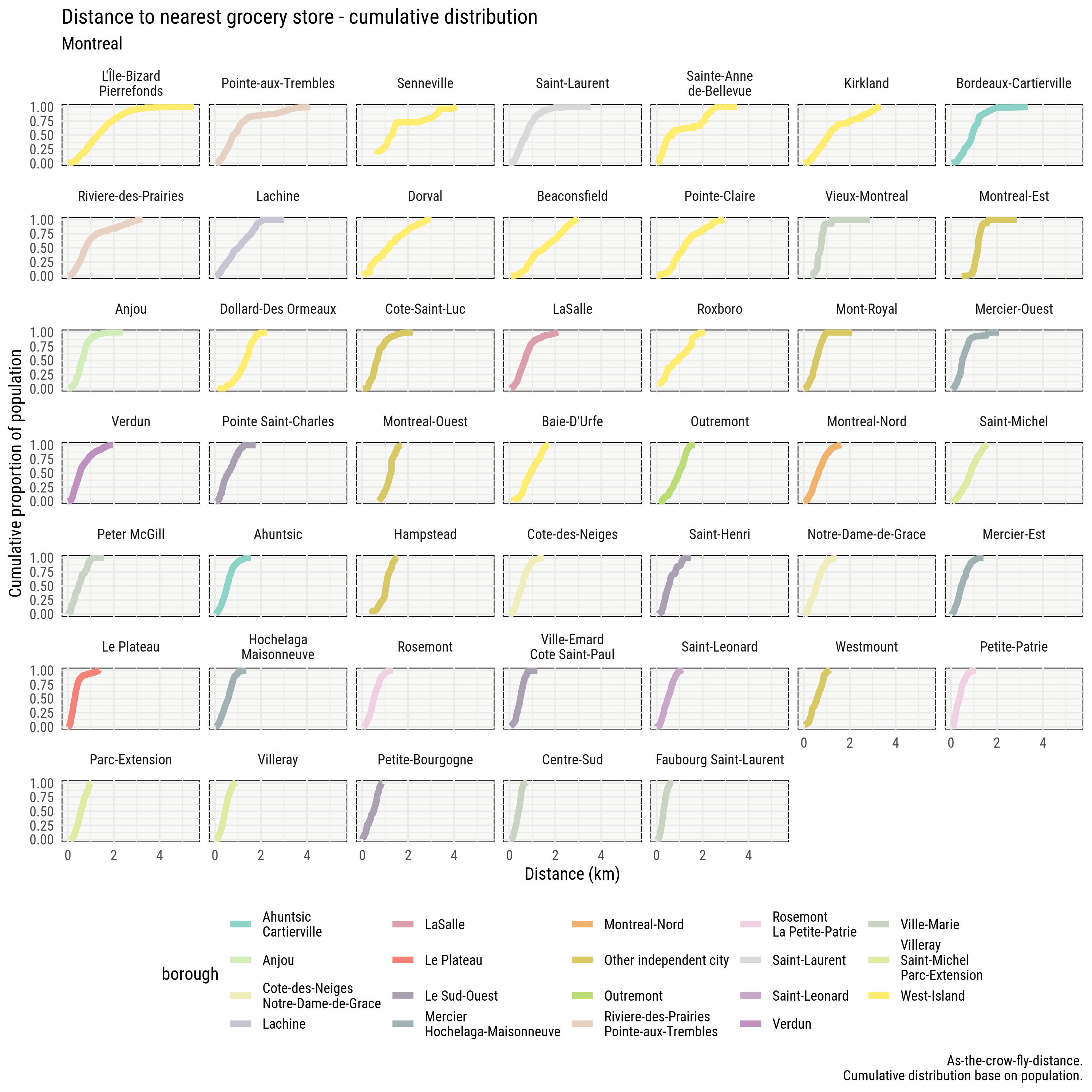 In Quebec Ciy, low-density neighbourhoods also have populations living extremelly far from groceries. At the other end of the spectrum, the entire population of the most walkable areas in Quebec are all within 1 km of the nearest store. 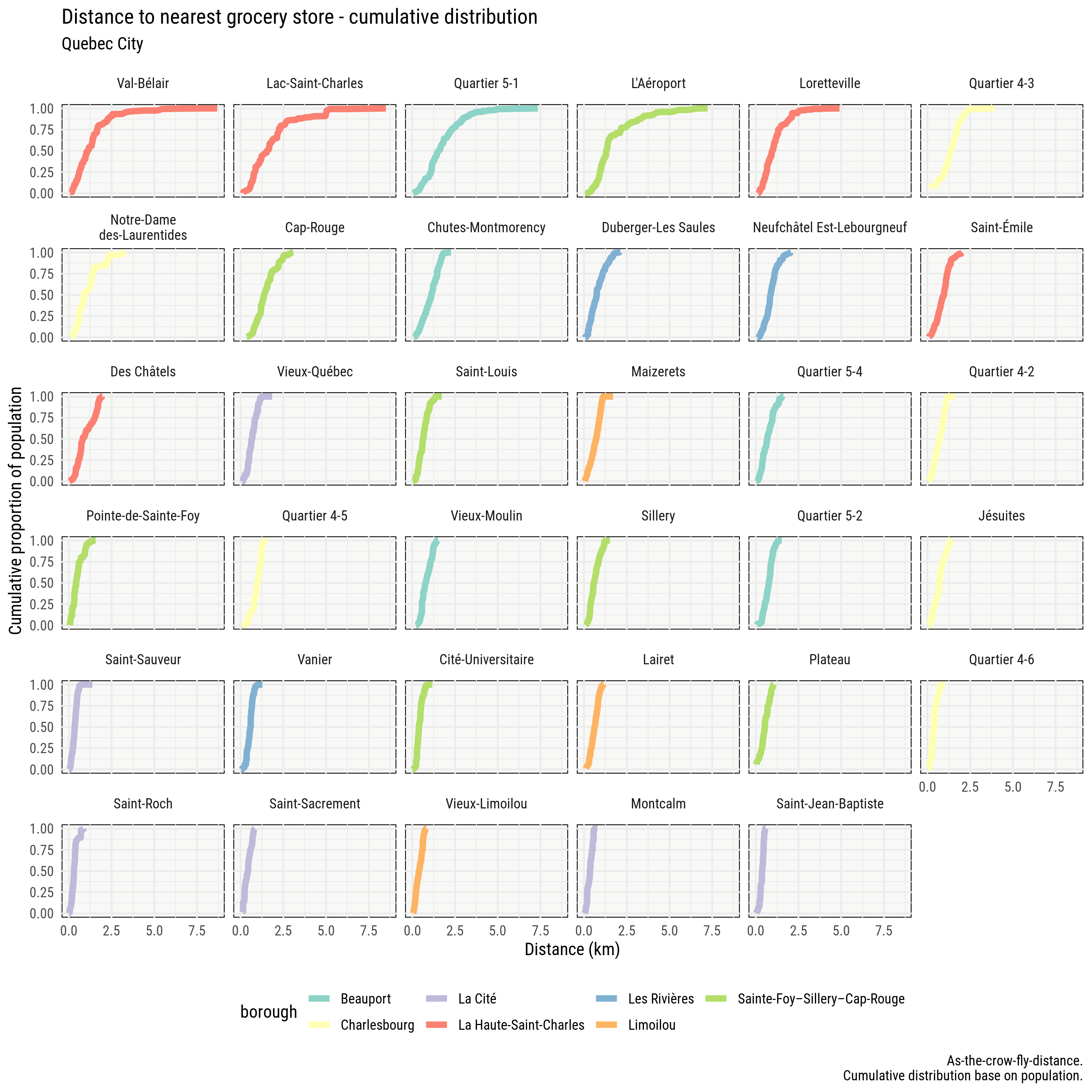 Mapping these results makes the spatial patterns even more explicit. While most areas in Montreal seem well amenitized, the suburbs in the west and east of the island reveal reduced accessibility. Low-density industrial areas near the Dorval airport also have a limited offering. 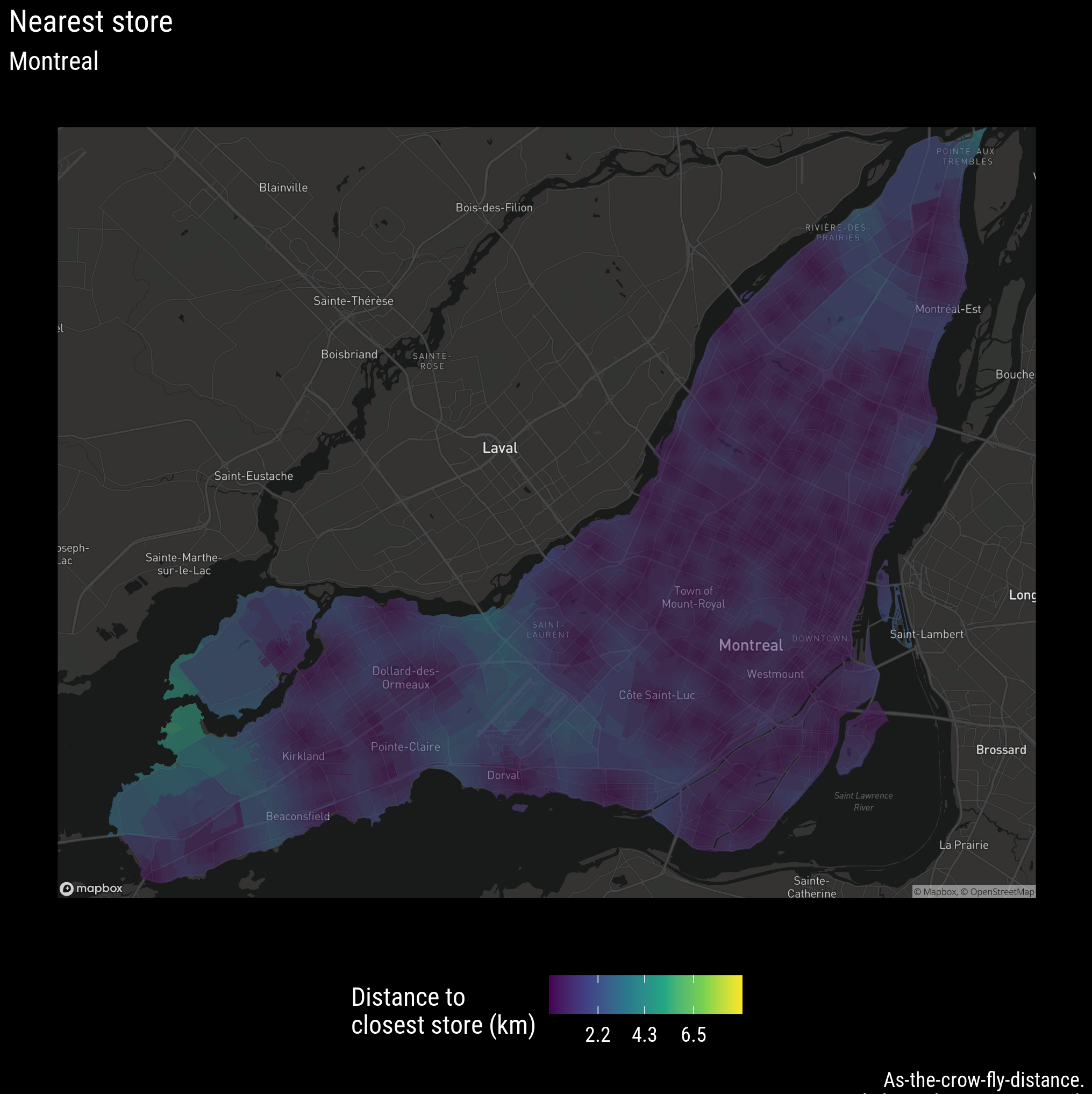 Things are bleaker in Quebec City, which has some very isolated populations living in rural areas more than 6 km from the nearest store. 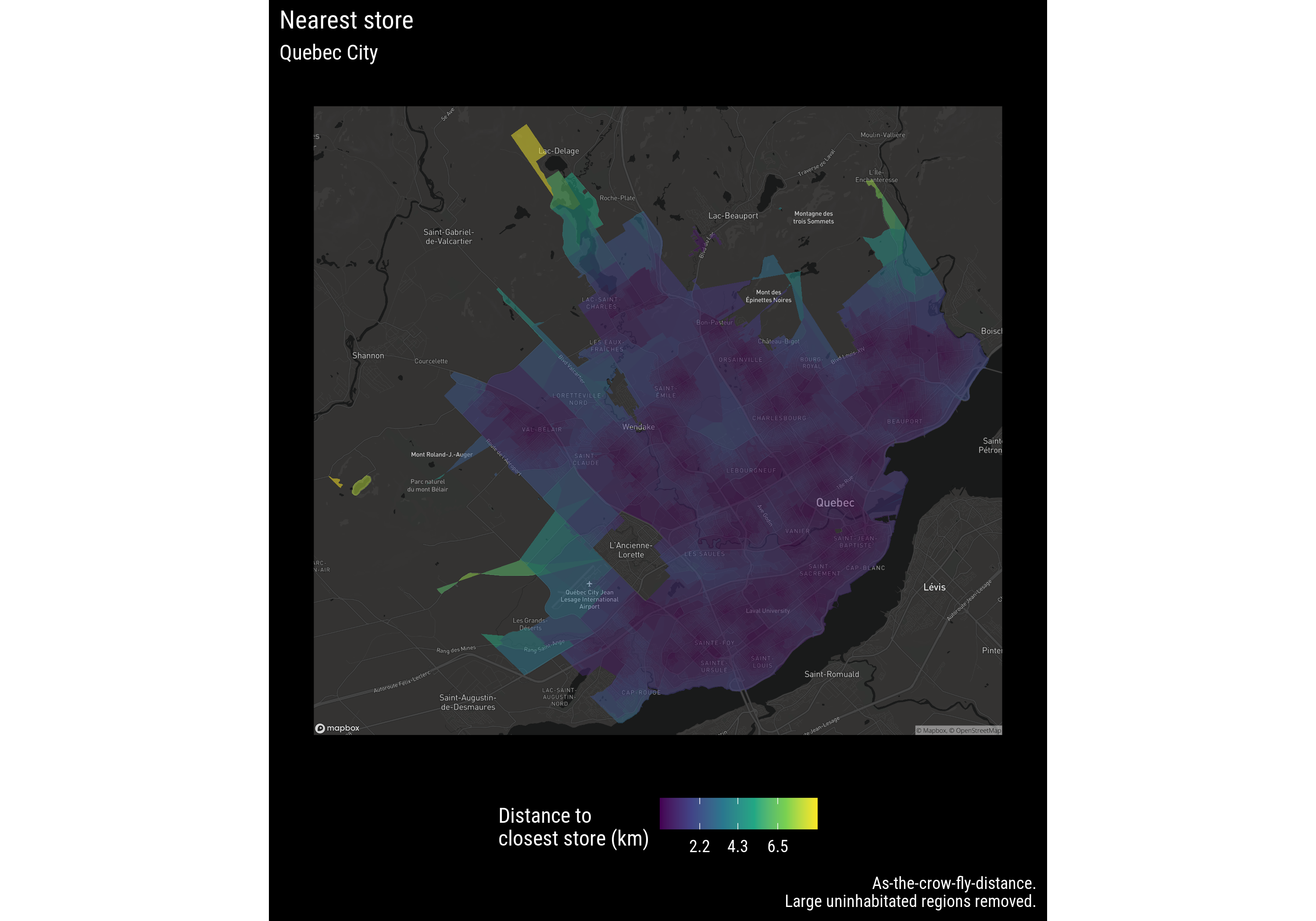 Apart from these few outliers, the maps above do not seem to suggest large differences between neighbouhoods. However, the picture changes dramatically when determining which areas are accessible by foot.

Unfortunately, only a few Montreal neighbourhoods have more than 75% of their population living within 500 meters of the nearest grocery store - which from experience seems like a reasonable threshold for walkability. A whopping 87,000 of these individuals can be found in the Plateau alone. 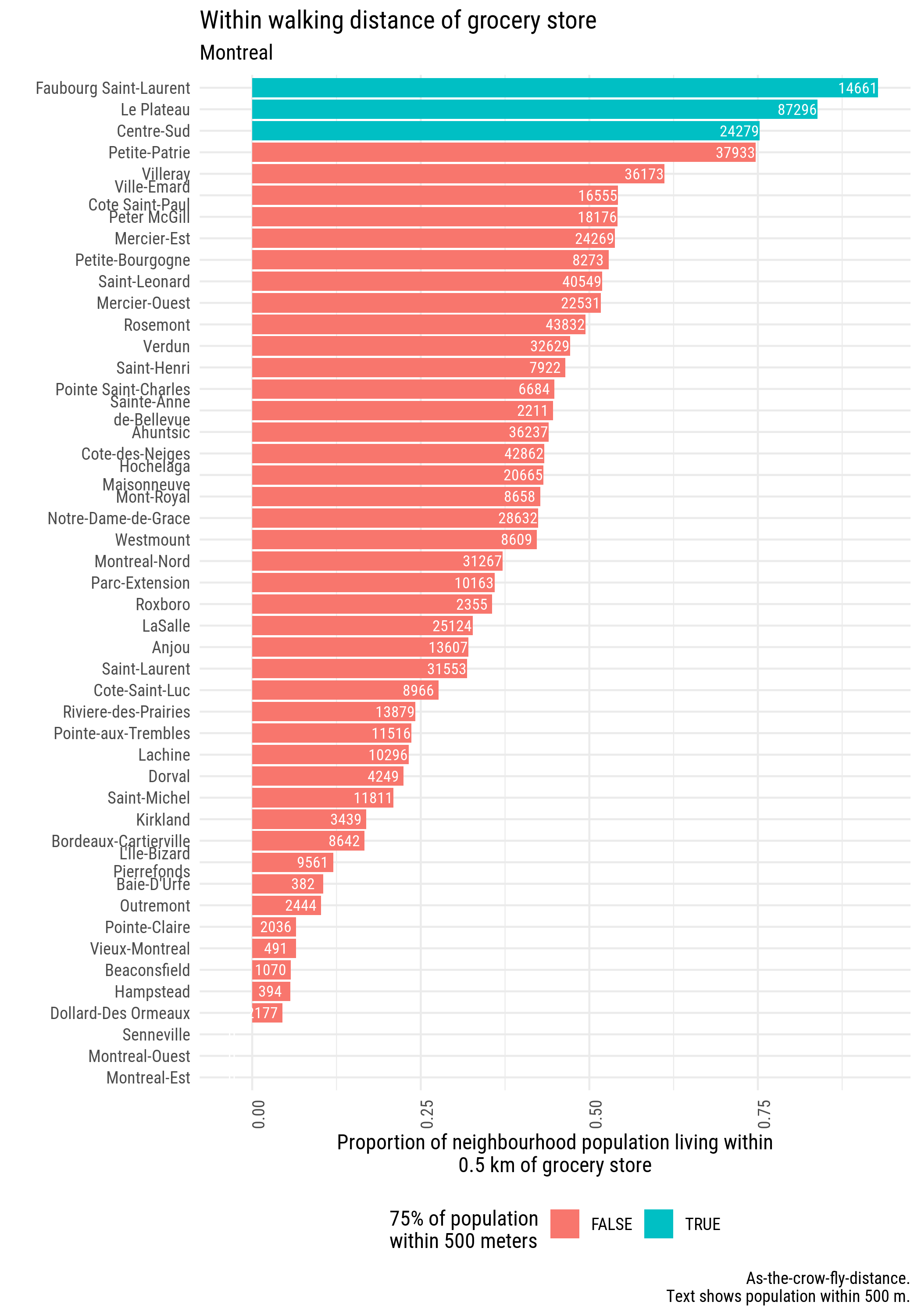 Quebec city has even more walkable neighbourhoods than Montreal. Almost 100% of residents of small historical Saint-Jean-Baptiste can walk to get their groceries - and given the neighbouhrood character, it seems likely that are large proportion of them actually do.

Although this is encouraging news, it is important to point out that these neighbourhoods are small: there are much more individuals that can walk to get their groceries in Montreal than in Quebec. 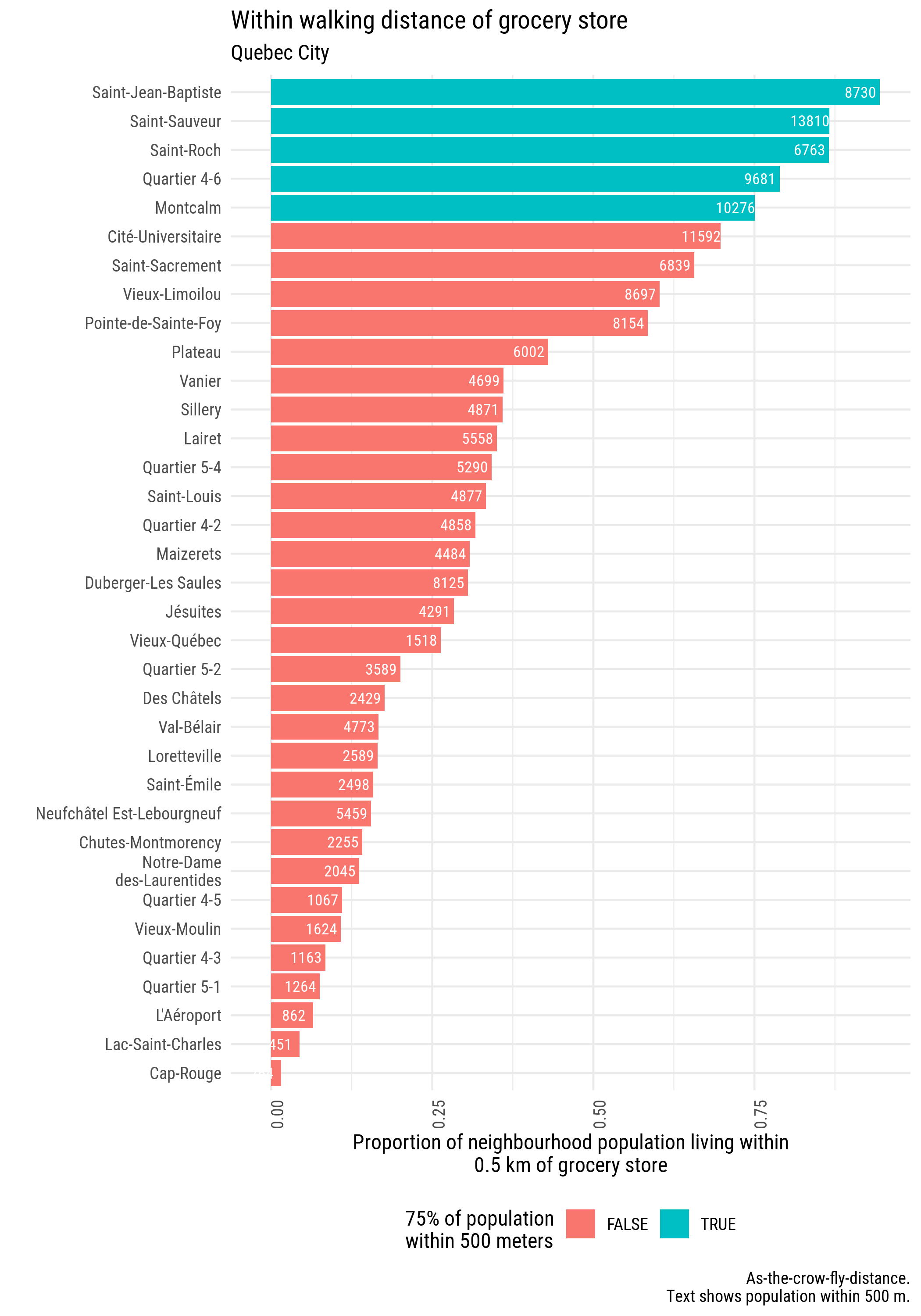 The following interactive map shows where these walkable areas are located. Polygon height is proportional to population and color represents distance to the nearest store. The nearest store is also shown when hovering above the data.

Not all neighbourhoods are created equal in terms of accessibility to groceries. While most areas in Montreal and Quebec City are within 2 kilometers of the nearest store, only a few are sufficiently dense and well-ametizied to allow citizens to walk to get food.

Even if disruptive technological inovations make this distance less important in the future, proximity to services will remain important. If we wish to build the 15-minute city, we will need more neighbourhoods like the Plateau in Montreal and Saint-Jean-Baptiste in Quebec.