Language has a profound impact on our politics, history, culture, social relationships, art and the way we build our cities. The topic is particularly important in Quebec where language is at heart of the region’s cultural identity and the status of French continues to generate tensions. However, the influence of language on city character is also apparent throughout Canada where it reveals important differences in history and migratory patterns .

A quick overview of official languages in selected cities

A quick glance at the following bar plots of the 50 largest Canadian census subdivisions reveals stark differences. Regional hubs like Halifax and Saint-John’s speak almost exclusively English. On the other hand, larger metropolis like Vancouver and Toronto have a large share of non-official language speakers and virtually no French speakers. Some of their neighbouring suburbs like Markham and Richmond are actually composed of a majority of non-official speakers, presumably due to a combination of strong immigration and greater affordability compared to more central areas.

In Quebec, the smaller cities speak almost exclusively French while the Ottawa-Gatineau and Montreal census metropolitan areas (CMAs) also have a significant share of Anglophones and non-official speakers. Sudbury and Ottawa are the only towns outside Quebec with a noticeable share of French speakers. 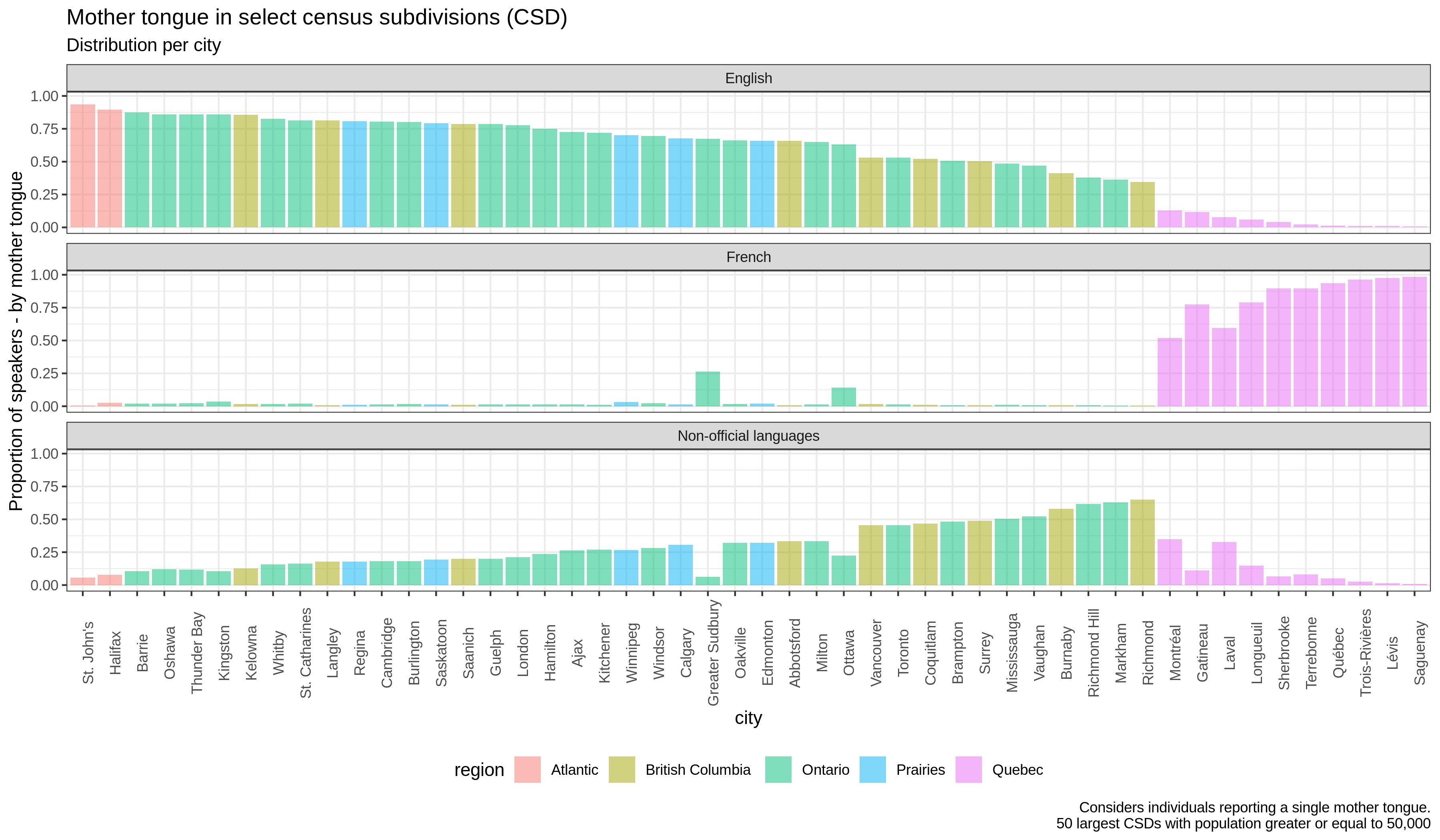 Performing simple k-means clustering on the proportion of speakers for any of the 3 groups on all 99 Canadian cities with population larger than 50 000 reveals other interesting patterns. First, the difference between Quebec and ROC is once again evident both qualitatively and quantitatively. Indeed, the k-means algorithm always isolates the Quebec cities from the rest for all k smaller than 10.

Second, as can be expected, larger cities (as indicated by the size of the point) are generally more diverse linguistically, which can be seen by the fact that they are usually far from the extreme points of the hypercube \([0,1]^3\). Halifax and Quebec City, which have populations over 400 000, are noticeable exception to this rule, since they are both almost unilingual.

Thirdly, we see that all points are close to either the English-Non official or French-Non official 2D planes. Very few cities have large proportions of all three language groups. The most diverse ones are the small towns of Greater Sudbury and Moncton which form their own cluster.

Non-official language speakers are far from forming a monolithic group across or within regions. This can be seen by clustering the 50 largest census subdivisions according to the proportion of speakers for each of the roughly 200 non-official languages surveyed in the census: 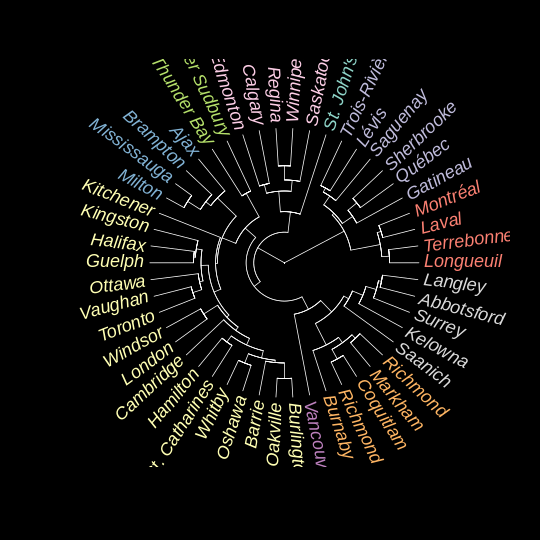 Hierarchical clustering based on 212 language proportion features and 50 observations/cities.

Considering the top 10 most prevalent non-official languages throughout Canada for each of these clusters reveals additional differences across regions. The two Quebec clusters show a higher proportion of Arabic and Latin languages than most regions. Tagalog is prevalent in the Prairies while many GTA and Vancouver suburbs have a very high proportion of Punjabi speakers. Both Cantonese and Mandarin speakers are also found in sizable numbers in these clusters. Finally, Italians are most present in the greater Montreal and Toronto regions. 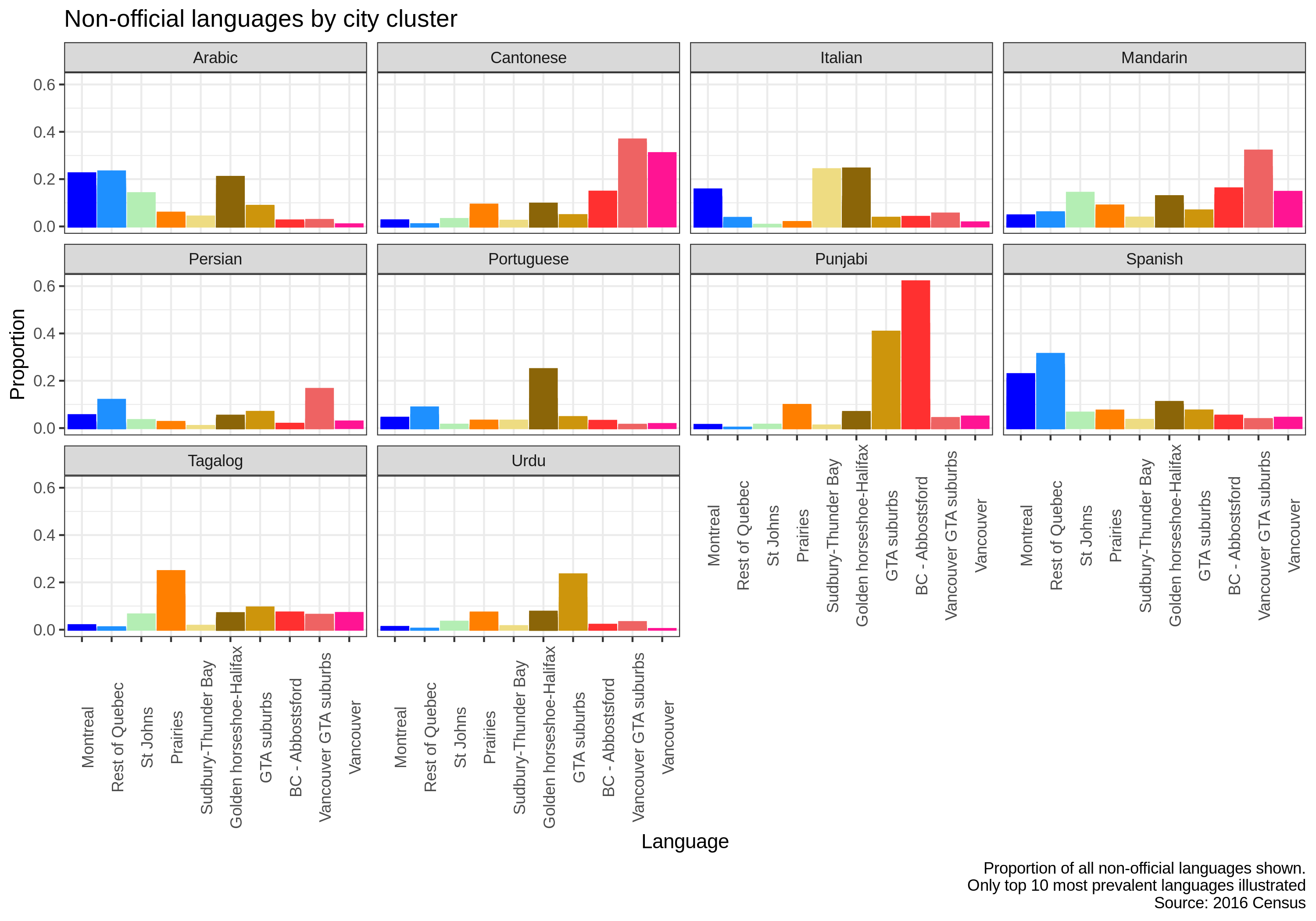 Looking at the top 5 most prevalent non-official languages per city also reveals interesting population patterns and regional particularities that cannot be identified from the aggregate bar chart above.

Creole emerges as very prevalent in greater Montreal, due to the historical ties with Haiti. Similarly, Ukrainian and German make up significant proportion of speakers in Saskatchewan due to past migratory patterns. German speakers can also be found in Abbotsford, Kelowna and Langley. Perhaps surprisingly, first nation languages appear in the top 5 languages only in the smaller cities of Saguenay and Thunder Bay.

The figure also suggests varying levels of clustering across languages. Punjabi speakers namely seem to display a stronger tendency to live close by since they form an important plurality of non-official speakers in Surrey, Brampton, Cambridge and most notably Abbotsford.

The following linguistic maps of the three largest Canadian CMAs qualitatively corroborate the hypothesis of language clustering. They also highlight differences between the large CMAs. While non-official language speakers can be found in very large numbers in the suburbs and satellite towns around Toronto and Vancouver, they are mostly concentrated on the main island in Montreal, and to a lesser extent on Laval. 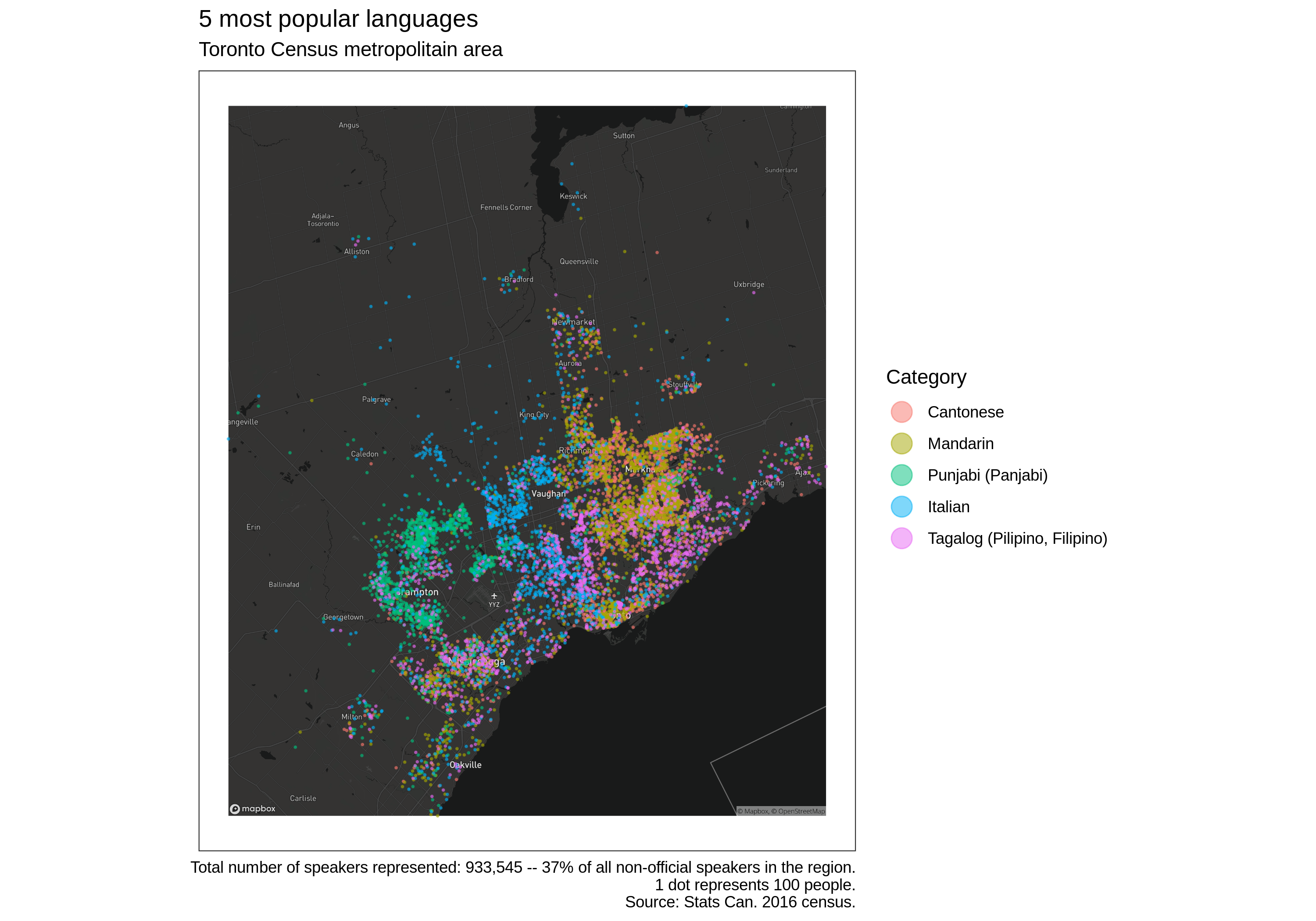 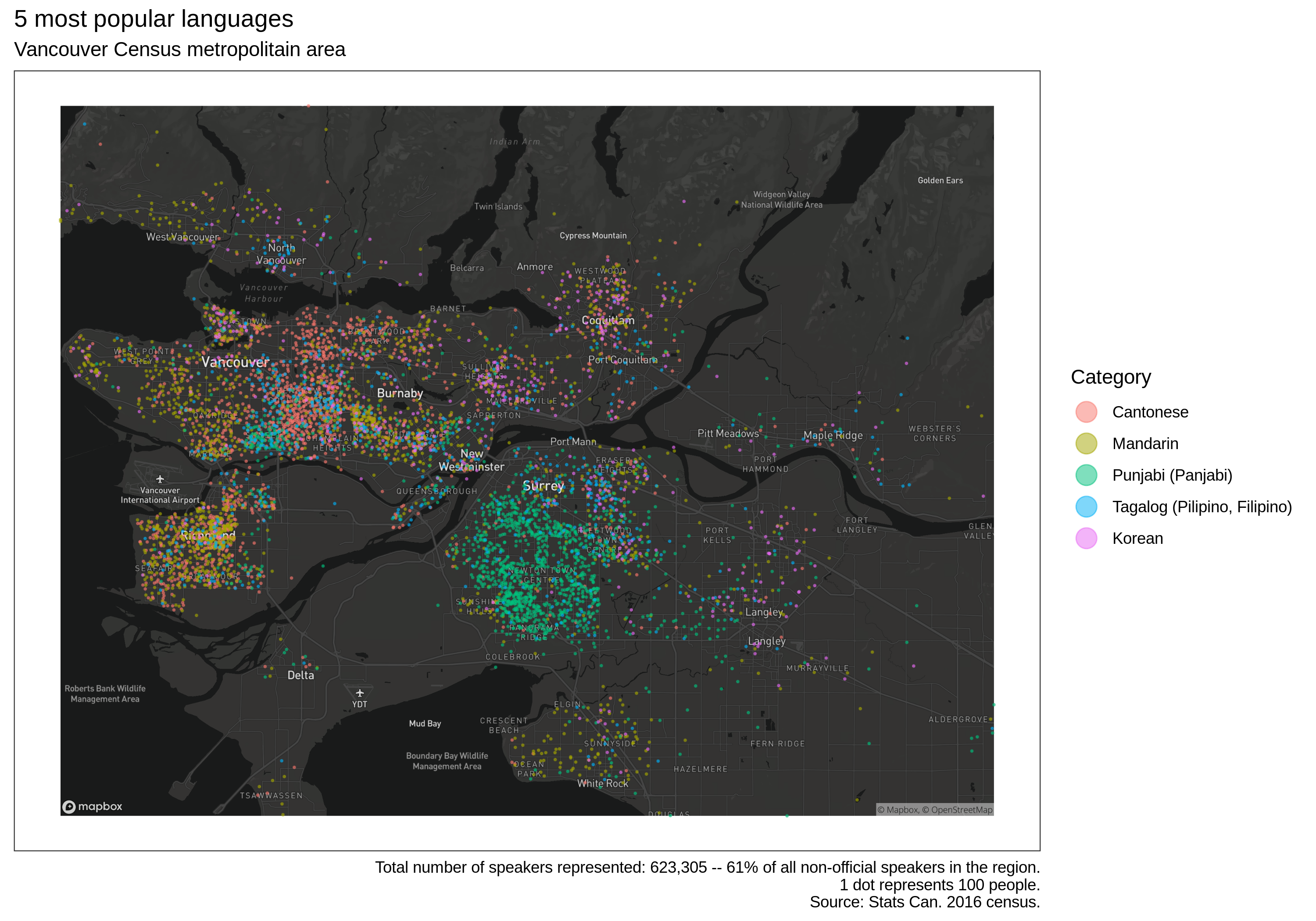 The following chart further reveals the important language diversity in each of the 10 largest Canadian CMAs. The Toronto region showcases a whopping 2.5 million non-official speakers, which is more than the entire population of the city of Vancouver or the island of Montreal. 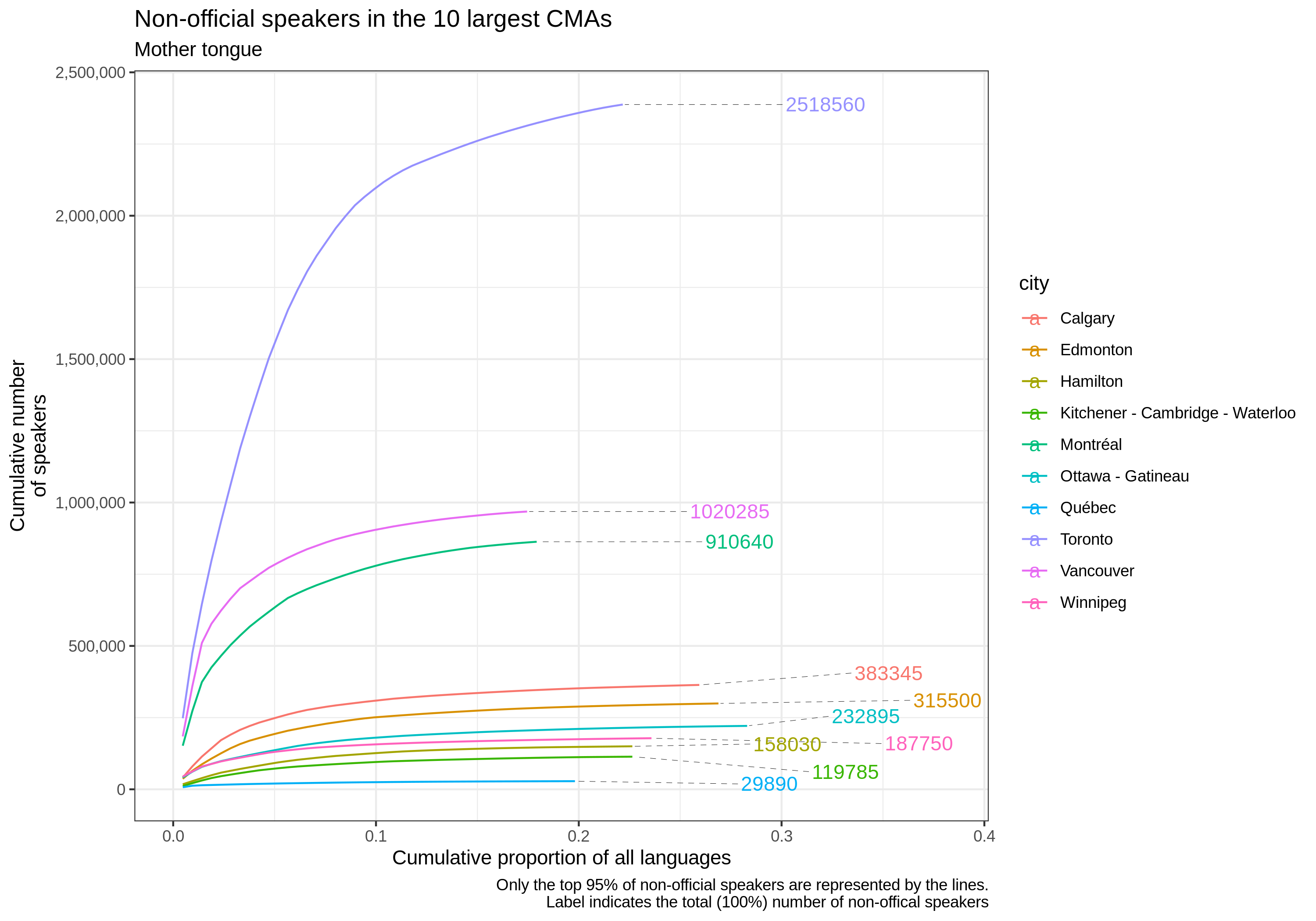 The chart also suggests that Toronto is more linguistically diverse than both Vancouver and Montreal. Roughly 22.2% of the most prevalent languages make up 95% of all speakers while this figure drops to 17.9 and 17.5 for Montreal and Vancouver. Ottawa is the most diverse with 28.3% of languages forming the top 95%.

Finally, all of the 10 major metros have over 100 000 non-official speakers. The main exception is the Quebec City region, which has less than 30 000 speakers despite having of population of over 800 000.

Various waves of immigration and idiosyncratic regional histories have created a rich and heterogeneous linguistic landscape in Canada. Although Quebec stands out as a prominently distinct region, the data also highlights important differences between cities across the country.

The large number of non-official language speakers in almost all major metropolitan areas is a testament to Canada’s multiculturalism. This diversity has played a key role in shaping the openness, resilience and character of these cities.