The Wasserstein distance and optimal transport theory were first studied by the French mathematician Gaspard Monge in the 18th entury. Since that time, the field has been revisited by many illustrious mathematicians like Leonid Kantorovich in the 20th century and more recently by the Fields medalist Cédric Villani.

In addition to these considerable theoretical advances, the method has also benefited from important advances in numerical computations and algorithms which have made it amenable to real large scale problems. Consequently, optimal transport has been applied successfully to various contexts such as regularization in statistical learning, distributionally robust optimization, image retrieval and economics.

This post focuses on the basic concepts underlying the Wasserstein distance, detailing some of its interesting properties as well as practical numerical methods. It shies away from the often math-heavy formulations and tries to focus on the important practical questions to build intuition.

In that case, the Wasserstein distance (to the \(p\)th power) takes on the much simpler form of a linear transportation problem, which we write explicitely in terms of the marginal probabilites \(a\in \Delta^n\) and \(b \in \Delta^m\):

The problem has a simple intuitive meaning as the minimum amount of work required to transform one distribution into the other. Indeed, when \(p=1\) this is called the Earth Mover Distance and can be though of as moving dirt from high valued bins of one distribution to throughs in another. Each time, we consider the physical distance between the bins and prioritize bins that are close to one another according to the ground distance \(D\).

Like other distances, it is non-negative, symmetric, subadditive and 0 only if the 2 measures are identical. It also offers interesting advantages over standard distances like the Euclidean distance. For instance, we notice that \(n\) and \(m\) can be different, which implies we can compare distributions with a different number of bins.1

Together with an adequate choice of ground distance \(D: \Omega \times \Omega \rightarrow \mathbb{R}_+\), the Wasserstein distance can capture important local properties of the problem. Each bin of a distribution is compared to every other bin of the other distribution, but closer bins are less penalized that ones that are farther. For images, this might help capture the local correlation in pixel intensity2. In contrast, using the raw Euclidean distance would require having 2 histograms with exactly the same number of bins/points/atoms and comparing values bin by bin.

As shown in the important Rubner et al. paper, these properties help the Wasserstein distance better capture perceived similarities between distributions than the standard Euclidean distance. The authors show that the Wasserstein distance remains superior even for distances induced by quadratic norms \(D(x,y) = ||K (x-y)||_2\), which do not suffer from the bin by bin comparison of the standard Euclidean distance for some symmetric positive definite matrix \(K \in \mathbb{R}^{d\times d}\).

As the figure on the right illustrates, all 3 vectors are all equally dissimilar with a maximal Euclidean distance of \(\sqrt{2}\) since they differ by 1 at exactly 2 positions. Hence the normalized distance is 1 off the diagonal and 0 otherwise. 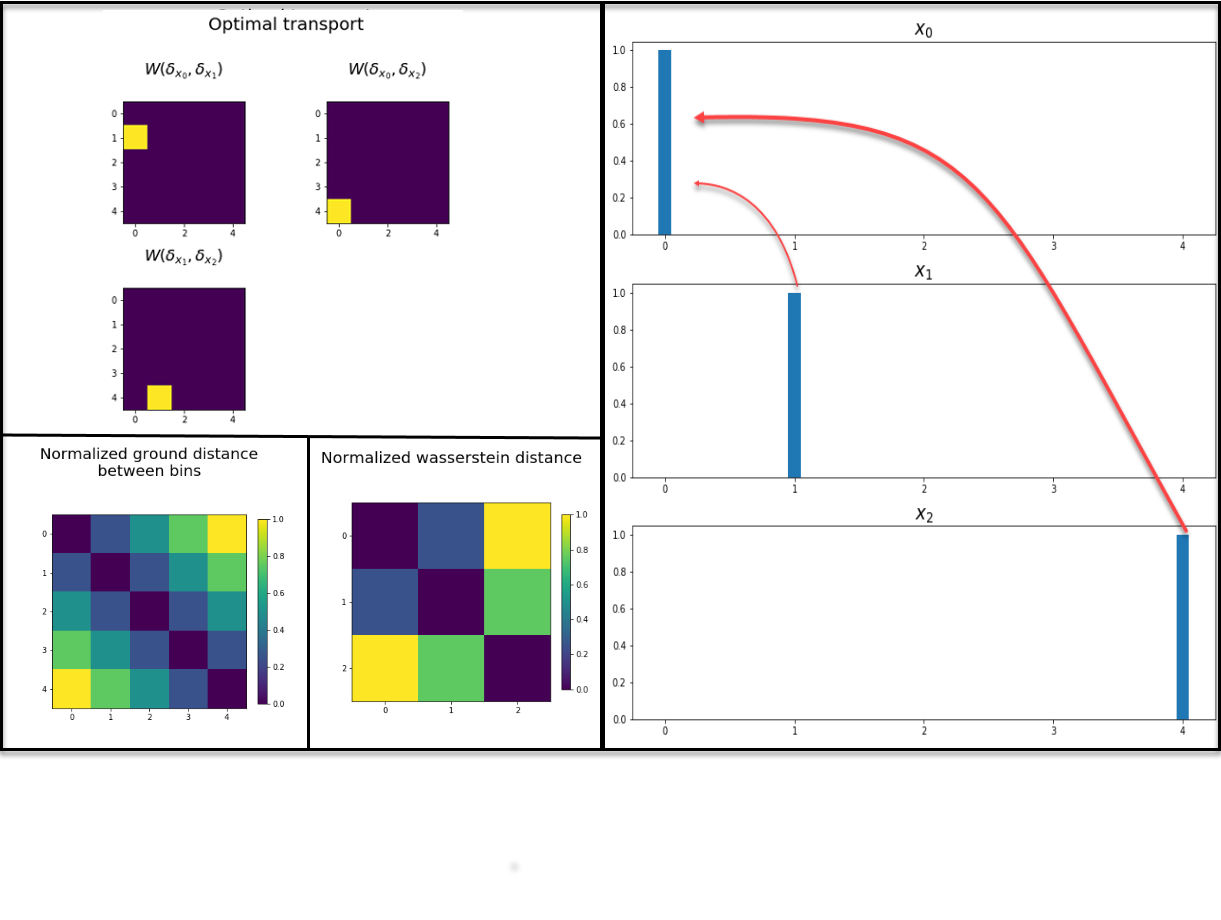 It is also interesting to study the barycenters generated by the Wasserstein distance. Following our intuition based on the usual Euclidean norm and the fact that \(\sum_{i=1}^N \frac{x_i}{N}\in \arg\max_u \sum_{i=1}^N \frac{1}{N}||x_i-u ||_2\) (which is one of the key results underlying the \(k\)-means algorithm for instance), we can think of barycenters as centroids or representative of a set of objects (measures in this case). More formally, given a set of \(N\) distributions \(\{\nu_i\}_{i=1}^N\), the Wasserstein barycenter is defined as the measure that minimizes the following problem:

The following sections detail two important cases in which we can find such solutions either numerically or analytically.

As illustrated in the figure below, this contrasts with the mixture distribution \(\sum_{i=1}^N \frac{1}{N}\mathcal{N}(m_i, \Sigma_i)\) which is in general not Gaussian. This shape preserving property has numerous useful applications in image processing, particularly for texture interpolation and texture mixing. 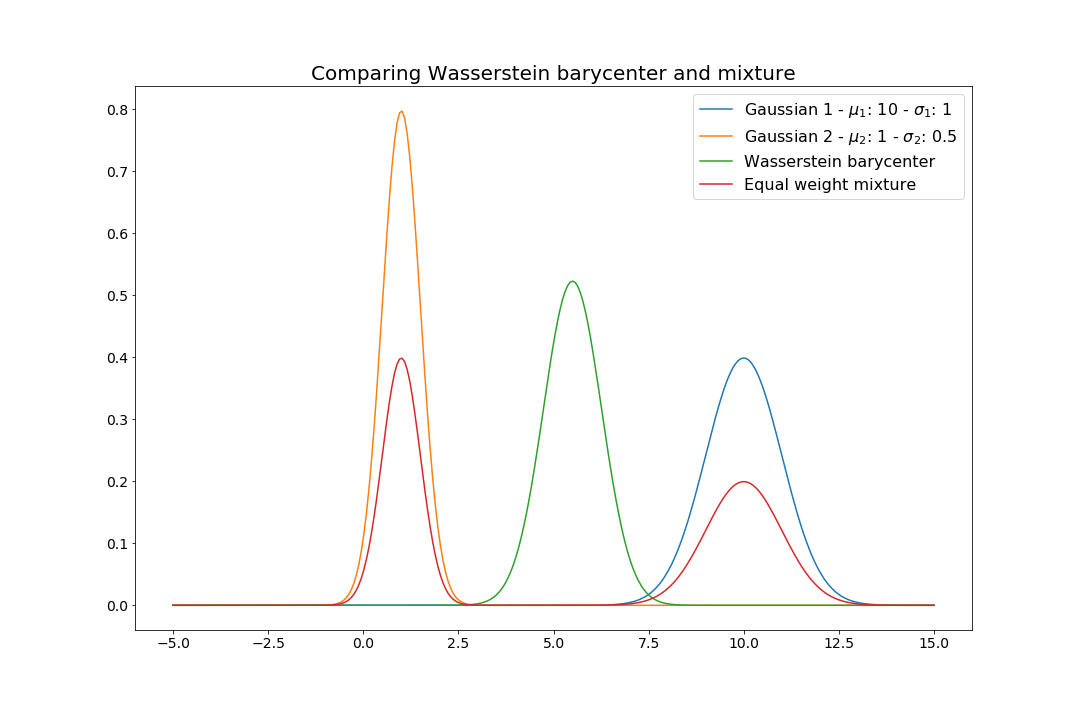 The Wasserstein barycenter in the preceding example was computed using the excellent \(\texttt{ot}\) Python module. For more details and in-depth examples, check out the documentation.

Another practically important situation, which is discussed in details in Cuturi and Doucet, is the case where we wish to find the barycenter of a set of arbitrary discrete measures that have the same support \(X=\{x_1,\cdots,x_n\}\). In order to obtain the Wasserstein barycenter for such a set of measures, we may use a simple projected subgradient method where we consider the average distance between the incumbent barycenter and one of the \(N\) measures \(\{\nu_k\}_{k=1}^N\) at each iteration.

There exists other more sophisticated method such as a multimarginal linear problem where the number of variables is \(O(n^N)\) and is therefore intractable for most real problems. More importantly, an extremelly efficient fixed point algorithm can be used to solve an approximate regularized version. Details on this Sinkhorn algorithm as well as countless other details and variations are given in the Peyré and Cuturi book.

This post illustrates that the Wasserstein distance is an extremelly powerful and versatile concept. Its locally aware shape preserving properties can be used for numerous applications and it benefits from various sophisticated numerical algorithms.

Regardless of these important advances, the field of optimal transport theory is extremelly rich and dynamic. As of 2020, many theoretical and practical research initiatives are underway and numerous applications are still being developped.