The influence of topography - 2 - geology

The topography of a region is closely related to its geology as well as the tectonic pressures that have shaped its surface. The different elevations of Quebec and Montreal namely reveal various facts about the geological history of the region. 1 This post presents a quick overview of the geological composition of both cities. It helps explain various facts about topography and even allows us to identify similarities between seemingly unrelated regions.

As can be seen in the following map, southern Quebec can be subdivided into three main geological regions: the Canadian Shield in yellow, the Saint-Lawrence Lowlands in green as well as the Appalachians in pink.

The Candian Shield is formed of old rock formations that once formed a large mountain range but have been eroded by time. On the other hand, the lowlands of the Saint-Lawrence are composed of various layers of sedimentary rock. This region was formed after a collapse of the Canadian Shield led to a rift which filled with water and accrued sediments. Their fertile grounds around the Saint-Lawrence help explain why they contain the vast majority of Quebec’s population. Finally, the Appalachians were formed more recently and therefore have higher peaks than those found in the Canadian Shield. 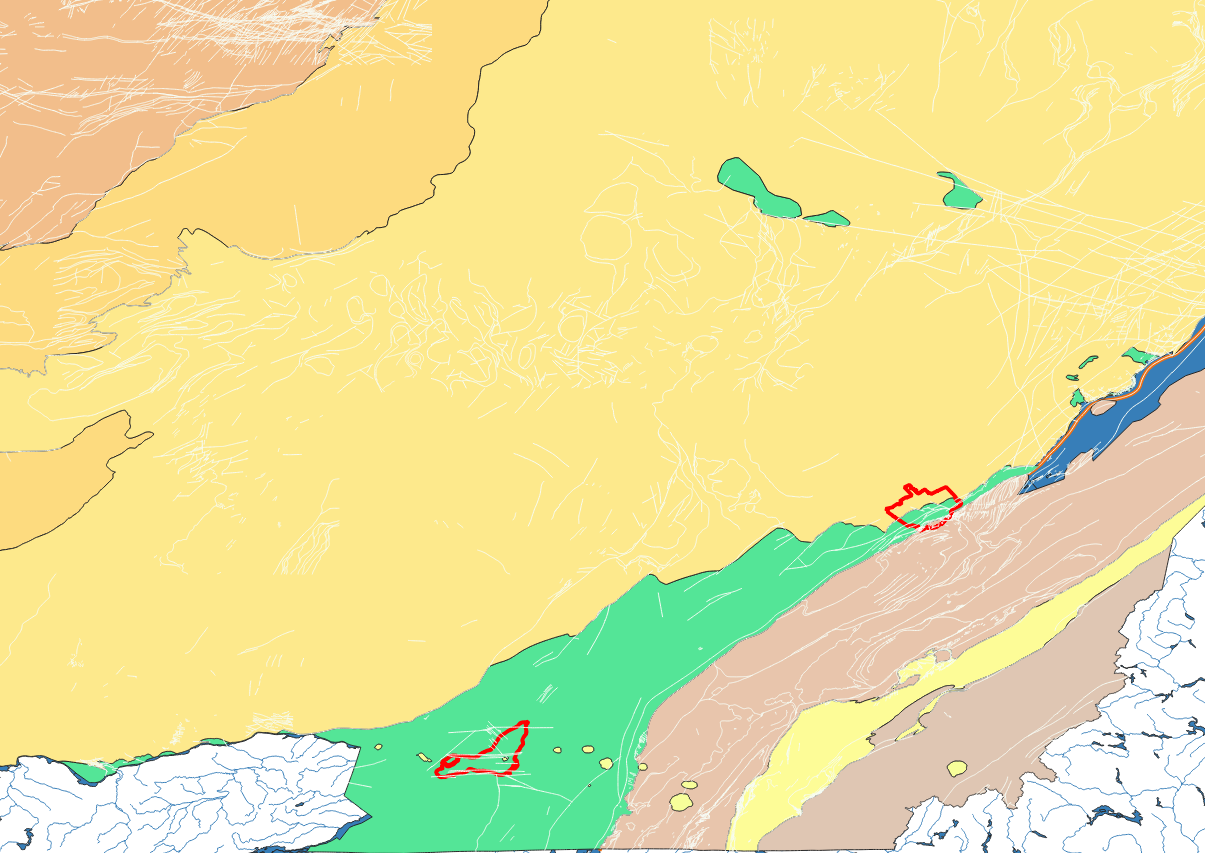 Geological map of southern Quebec. Boundaries of Montreal and Quebec are shown in red and fault lines in white.

The general flatness of Montreal can be explained by the fact that it lies entirely within the Saint-Lawrence Lowlands. The only geological pecularity within the city limits is Mont-Royal, which is show in yellow. 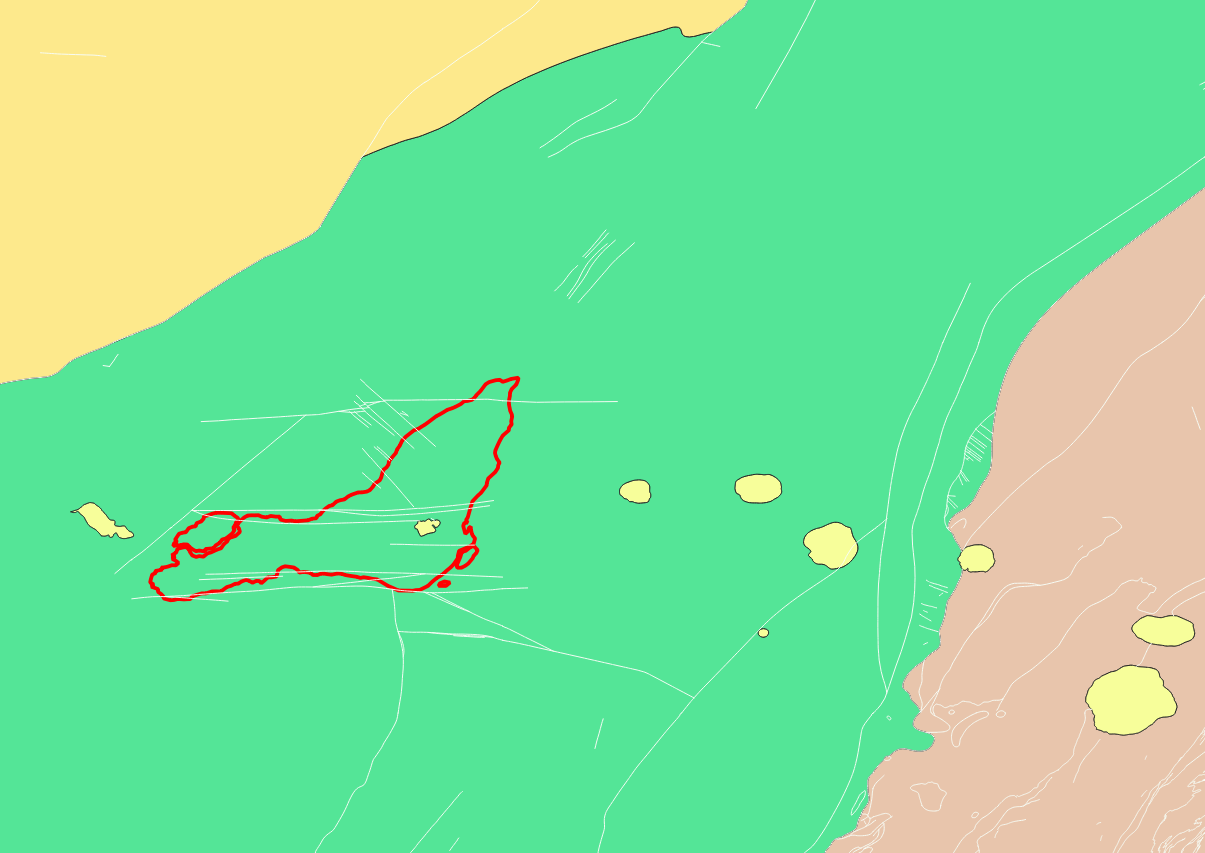 The following geological study of Montreal as well as this survey mention that the Mont-Royal as well as the rest of the Montérégies hills like Mont Saint-Hilaire, Mont Saint-Bruno and Rougemont were created by the intrusion of ignous rock after the formation of the lowlands. These intrusions are clearly visible not only in the composition of the rocks, but also in terms of elevation:

Topographic map of Montreal and the Monteregies Hills. Left with water, right only topography

On the contrary, Quebec city lies at the intersection of three different geological regions: the Canadian Shield to the north, the Saint-Lawrence Lowlands in the middle and start of the Appalachians in the South. 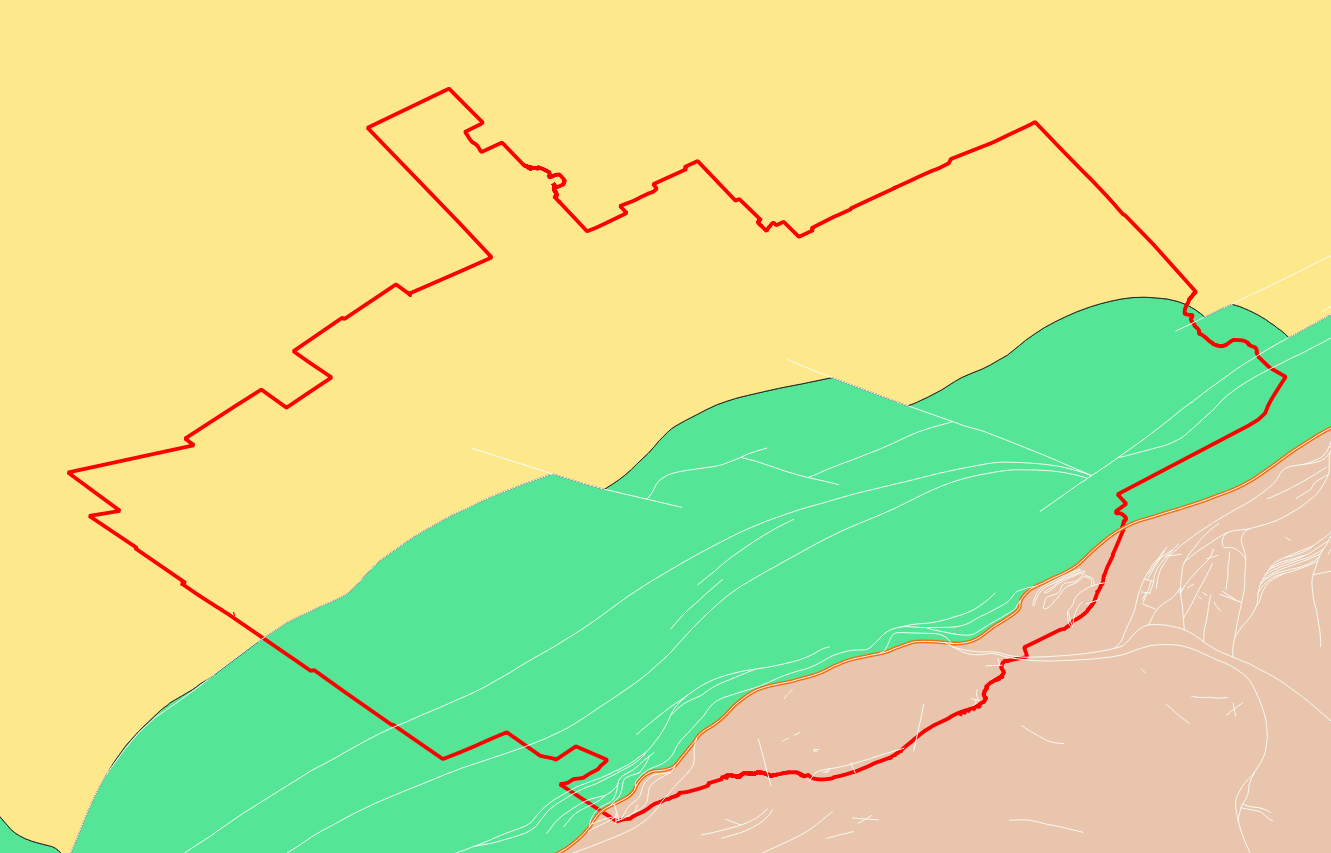 Considering the geological regions as well as the fault lines delimiting them seems to qualitatively explain a large part in the variation of the city’s elevation. The northern part of the city in the Canadian Shield as well as the Quebec promontory in the Appalachians are both much more elevated and steep than the central portion within the Saint-Lawrence Lowlands.

Geological and topographic map of Quebec.

The Logan fault as well as the one delimiting the lowlands and the Canadian shield are deemed inactive. However, Quebec and its surroundings have suffered a few important earthquakes in 1663 and 1925 that generated important damages to buildings. This seismic activity is partly attributed to the action of the various active faults aroung the Baie-Saint-Paul crater, show in the following map in red: 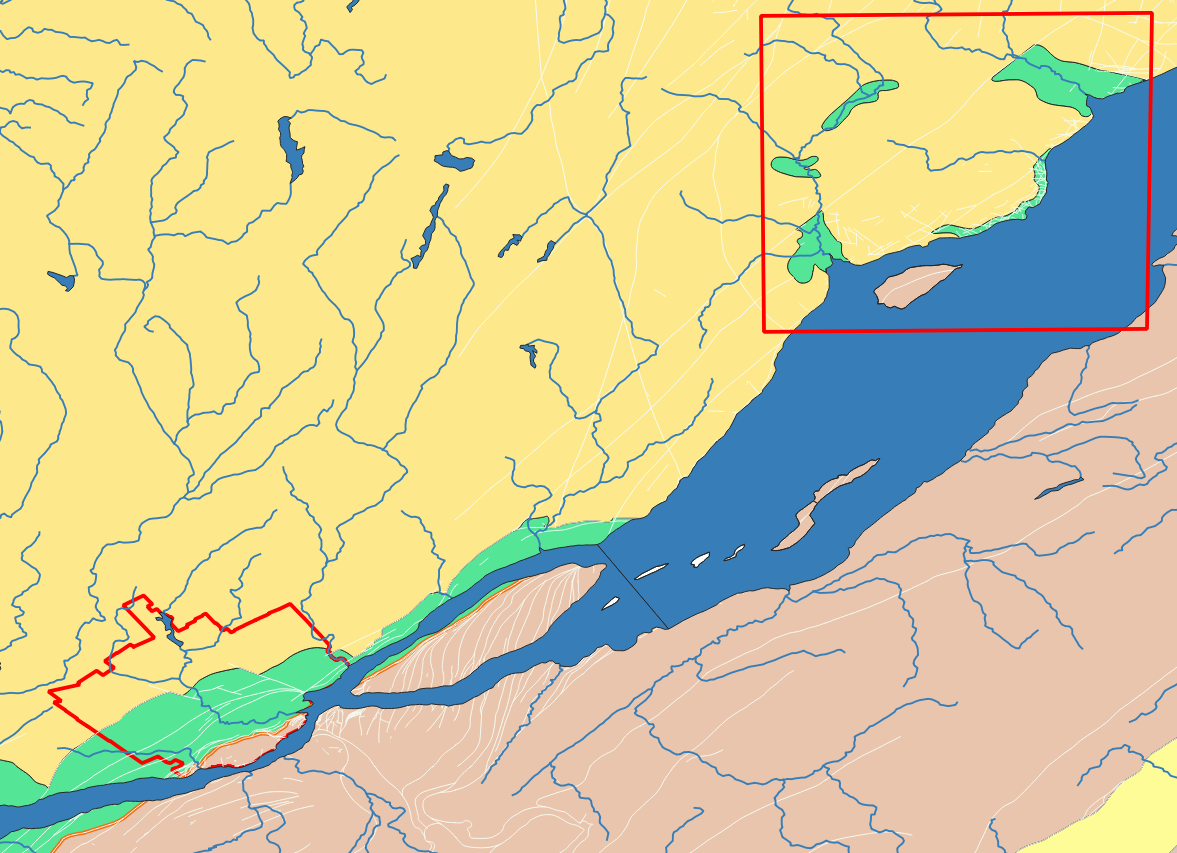 The presence of important landmarks can also be traced to some specific geological phenomena. As mentionned in this report, the famous Montmorency falls in Quebec City were created by a fault line. This can be seen by the different visible geological artefacts such as the protruding rock in the picture below 2. 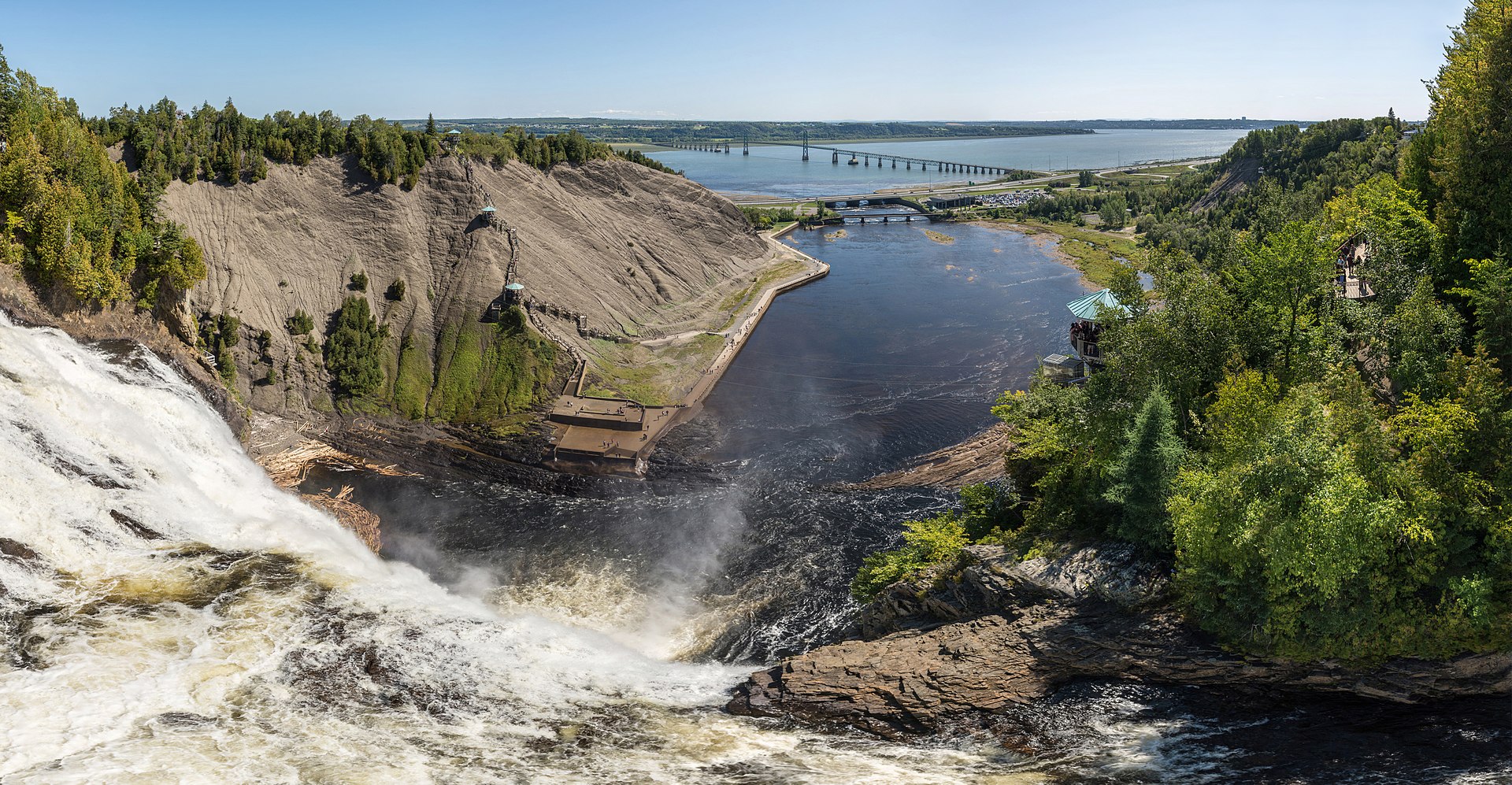 This is also apparent from the following topographic map with fault lines. Thes same faults are also responsible for the caracteristic slope of the Côte de Beaupré region. 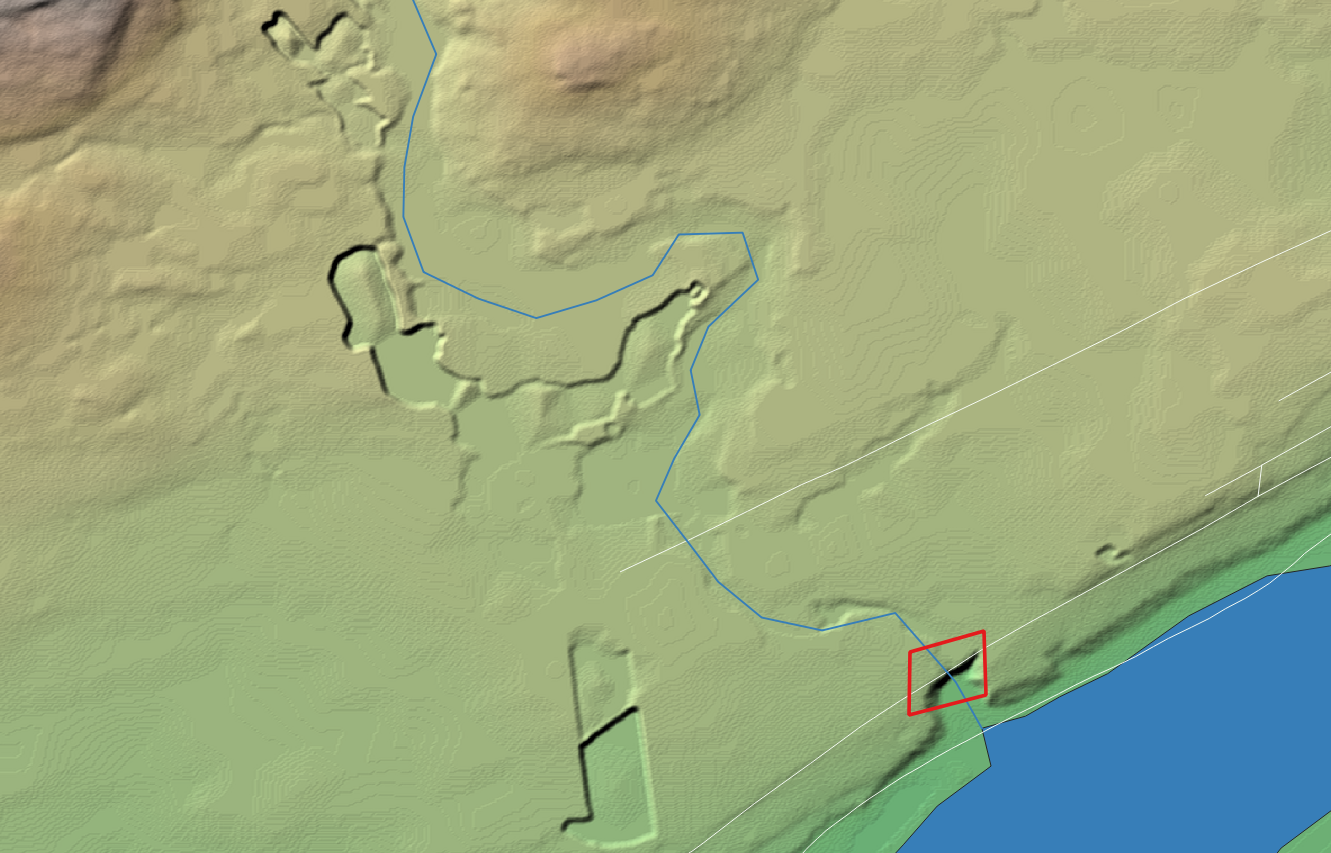 Topographic map of Montmorency river with fault line and falls

The presence of geological faults near the Old city has even influenced the toponimy of the city. European settlers named one of the cliffs near the citadel “Cap-diamant” (diamond cape) due to the presence of quartz. One of these cliffs is shown in the picture below. Today a municipal district still bears the name. 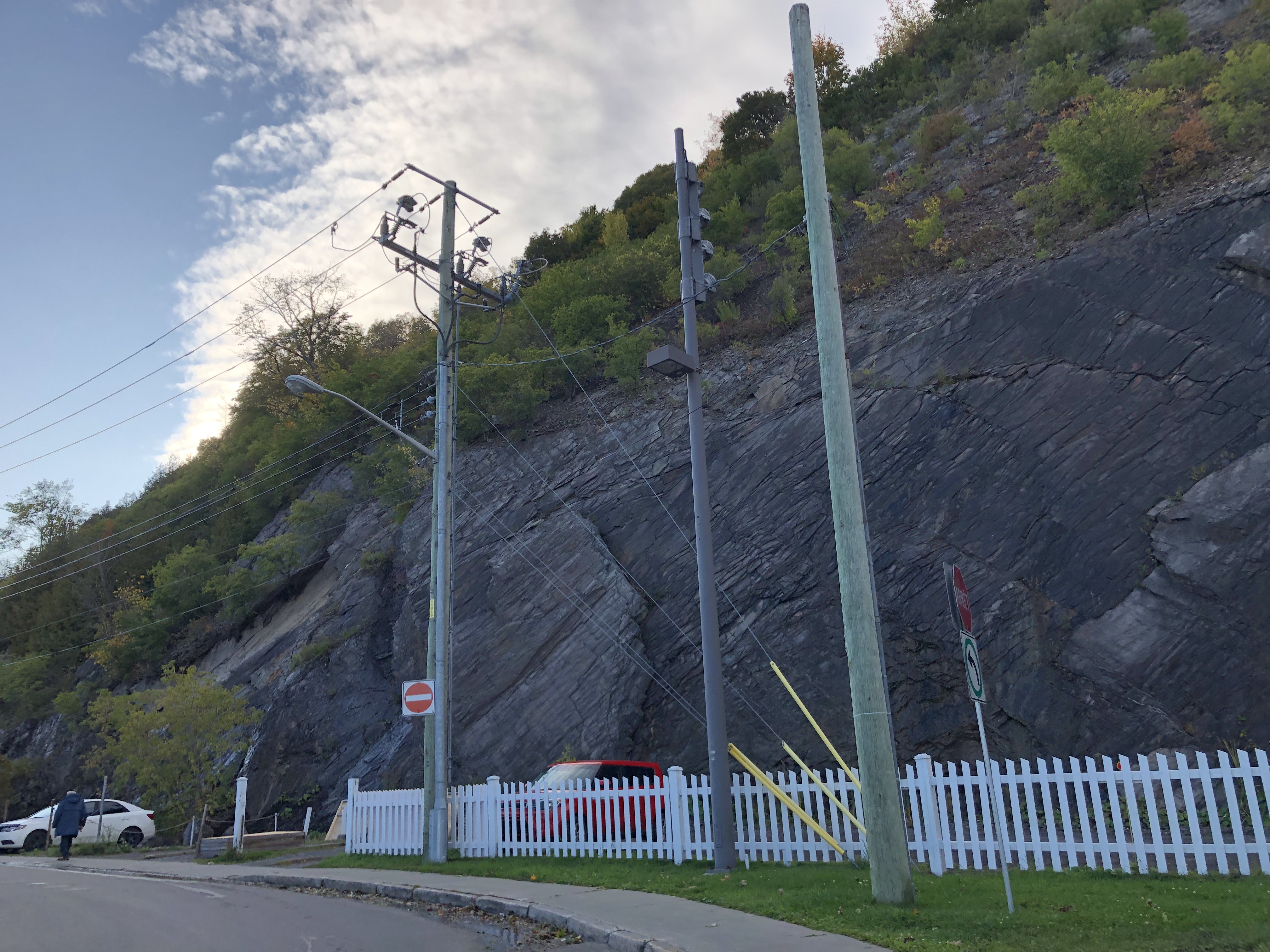 The Cap-Rouge (red cape) neighbourhood also takes its name from the red schist which can be observed near the mouth of the Cap-rouge river and the Quebec promontory.

Geological phenomenon such as ignous rock intrusion and thrust faults have given Montreal and Quebec their unique landscape. We owe the Mont-Royal, the Montmorency Falls and the Île d’Orléans to specific geological forces.

The next post will explore some of the impacts terrain and geology have had on important historical events.