The influence of topography - 1 - overview

The topography of a city is a defining trait. San Francisco is known for its rolling hills, Vancouver for its nearby snowy peaks and below-sea-level New Orleans for its overground cemetaries.

Topography shapes the way we commute and live. The slope in Lausanne always seem to lead you to the lake and the flatness of Amsterdam makes cycling there a breeze. Elevation and terrain also have noteworthy impacts on where, why and how we build our cities. The old town of Cuenca in Spain was built on top of a cliff by Muslim rulers in the 6th century for defense purposes while both Besançon in France and Bern in Switzerland lie in a bend in a river near strategically important sites protected by the neighbouring mountains

The very different topographies of Quebec City and Montreal have also had foremost importance on the historical location of the cities as well as their ongoing development. Even today, elevation continues to play important and sometimes unforseen effects on the way we perceive the urban landscape. This series of posts explores different facets of elevation related to these two cities in particular, namely:

A quick comparison of both cities

Elevation might not seem like such a big deal to someone living in Montreal. As can be gleaned from the following topographic map of the city on the right, most of the island is flat terrain with small variations in grade except for Mount-Royal. On the other hand, Quebec City, present on the left together with chunks of Lévis in the bottom right and Île d’Orléans to the left is composed of lowlands and small size mountains which form the start of the Laurentian mountain range. 1

Zooming in on the specific city administrative boundaries, the following contour plot 2 confirms that elevation is much more pronounced and variable in Quebec than in Montreal. From the Quebec map on the left, we can make out Parliament hill at the bottom right, the start of the Laurentians at the top and the flat plain in the middle. In the case of Montreal, we can figure out the approximate location of the cross as well as the Lac des Castors.

The larger variability and range of elevation values for Quebec are also apparent in the distribution of elevation data from the street network 3 of both cities. 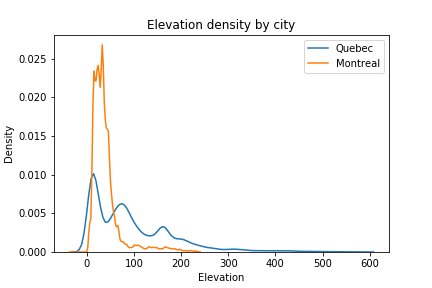 The following gif illustrates the characteristic profile of Parliament Hill and the relative flatness of the rest of the surrounding central Quebec City neighbourhoods.

And if you’re still not nauseous, here’s a dynamic birds-eye perspective of Montreal confirming that the island is basically just flat terrain appart from a small hill called Mount-Royal.

We can obtain additional interesting topographical information by considering the absolute edge grade from the street network of both cities. To get a more concise and intuitive perspective, we can also average out these values across a given neighbourhood. The following bar plot is consistent with the comparative analysis above. It reveals that most Montreal neighbourhoods have streets of similar mostly flat terrain. 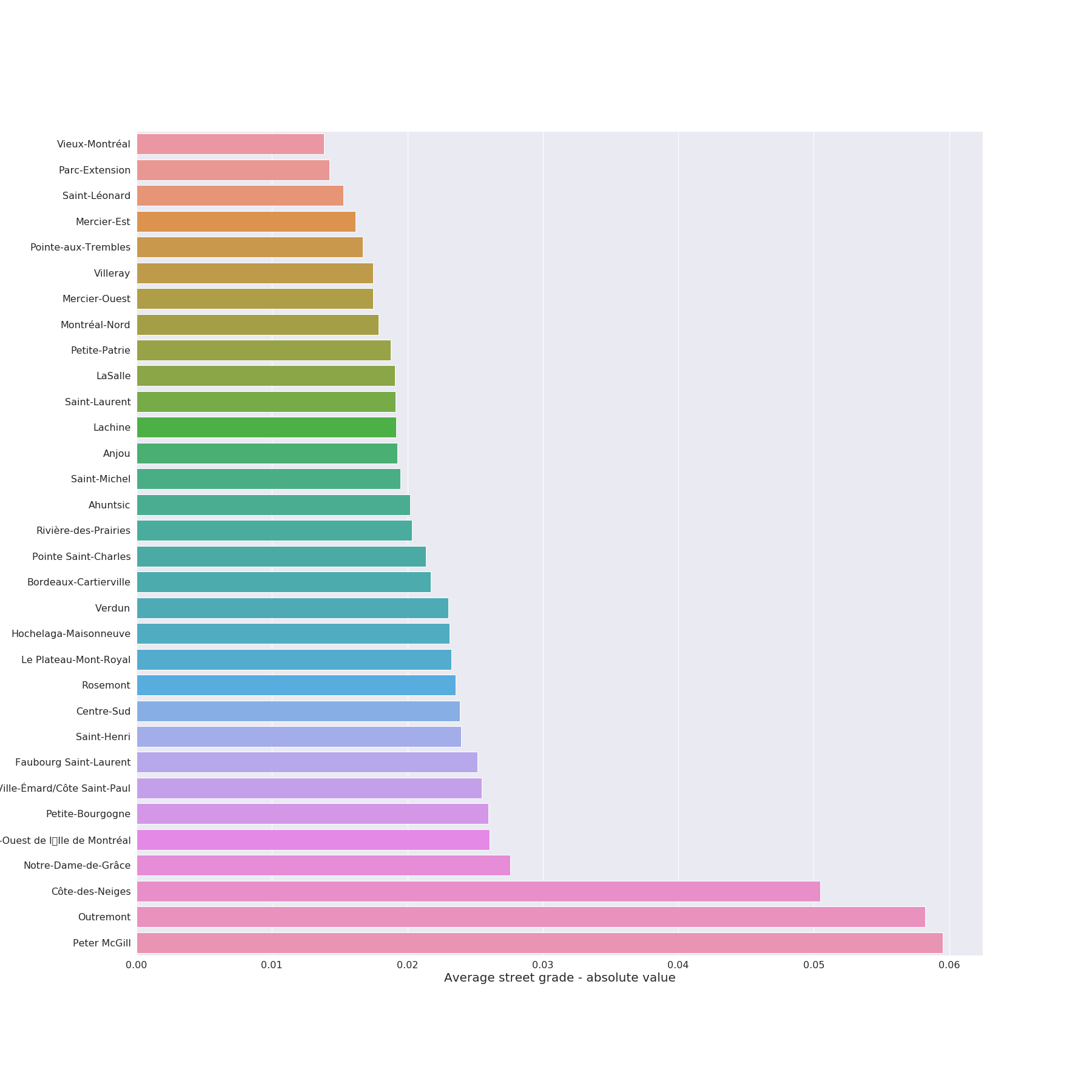 As can be expected, the only neighbourhoods with steep roads can be found around Mount-Royal. This is common knowledge for anyone having ever biked to and from say, UdM to downtown, but it is still interesting to draw the choropleth network. Dark colors represent smaller values close to zero while lighter colors indicate larger ones. The white missing neighbourhood at the bottom of the bounding box on the map is Westmount. It is also rather hilly and would most likely appear in the top four if it was part of the city. 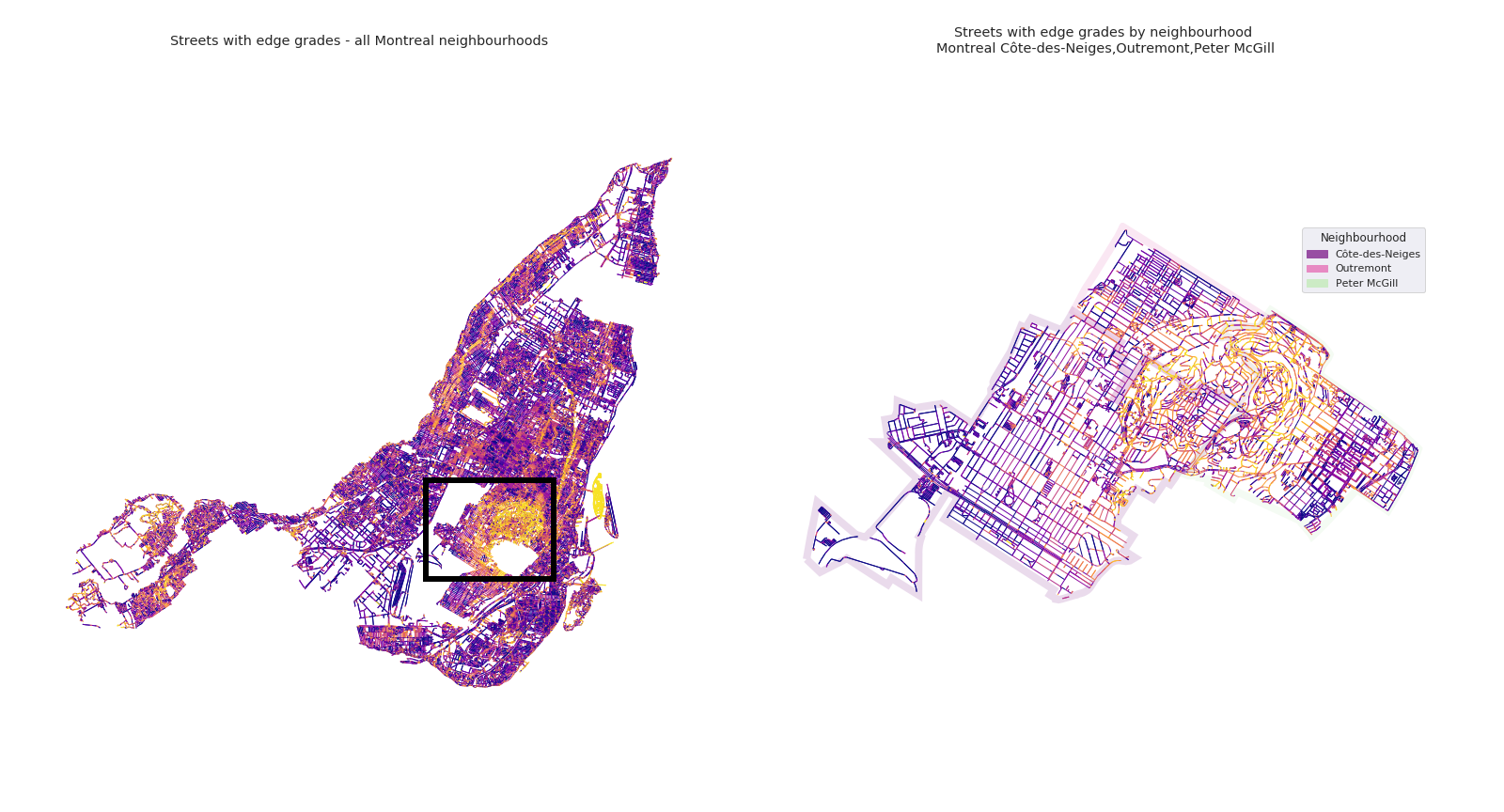 On the other hand, neighbourhoods are much steeper on average in Quebec City. Nine are steeper than Cotes-des-neiges, the 3rd steepest neighbourhood in Montreal. 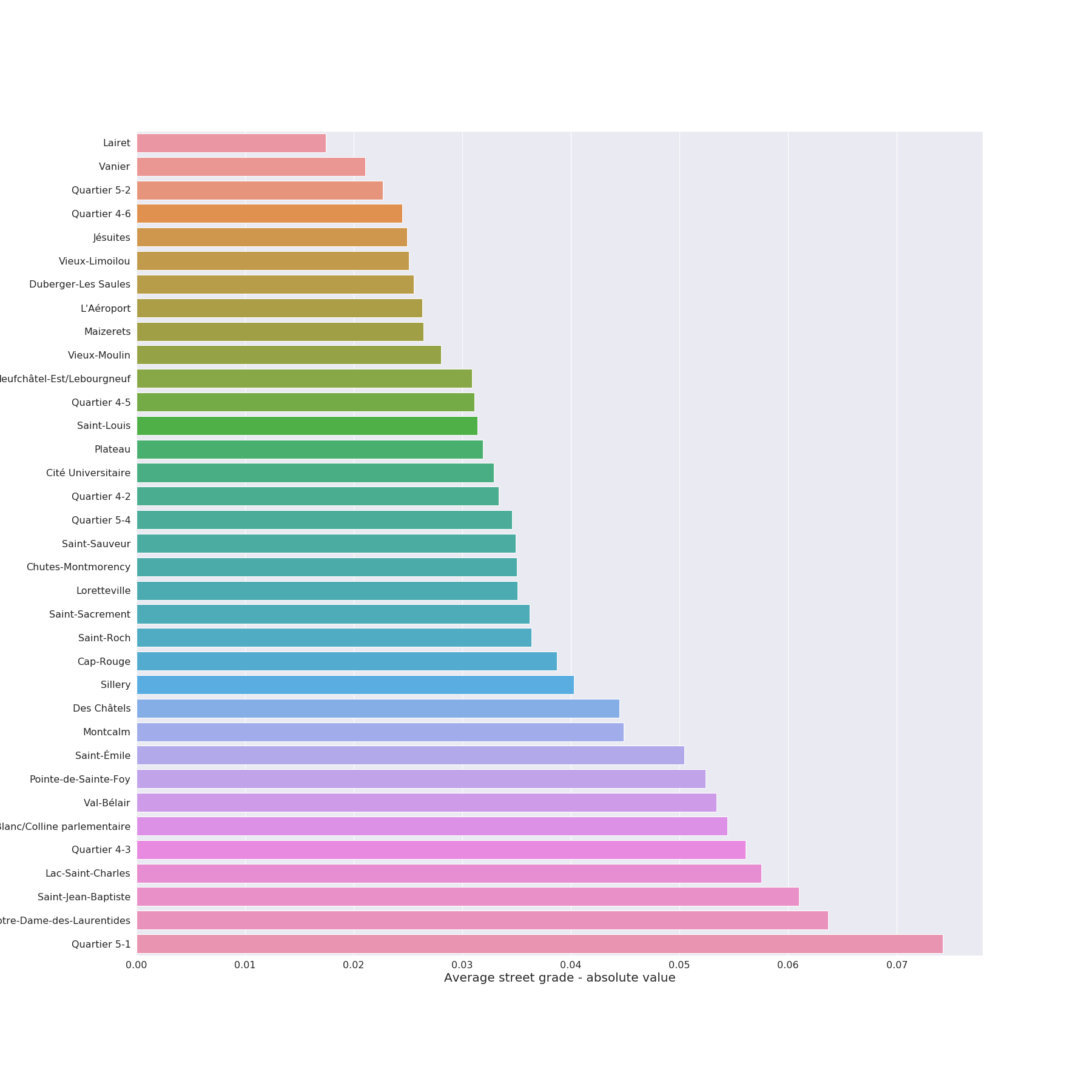 Three of the four neighbourhoods with the highest grade lie at the northern part of the city limits, at the beginning of the Laurentian mountainside. 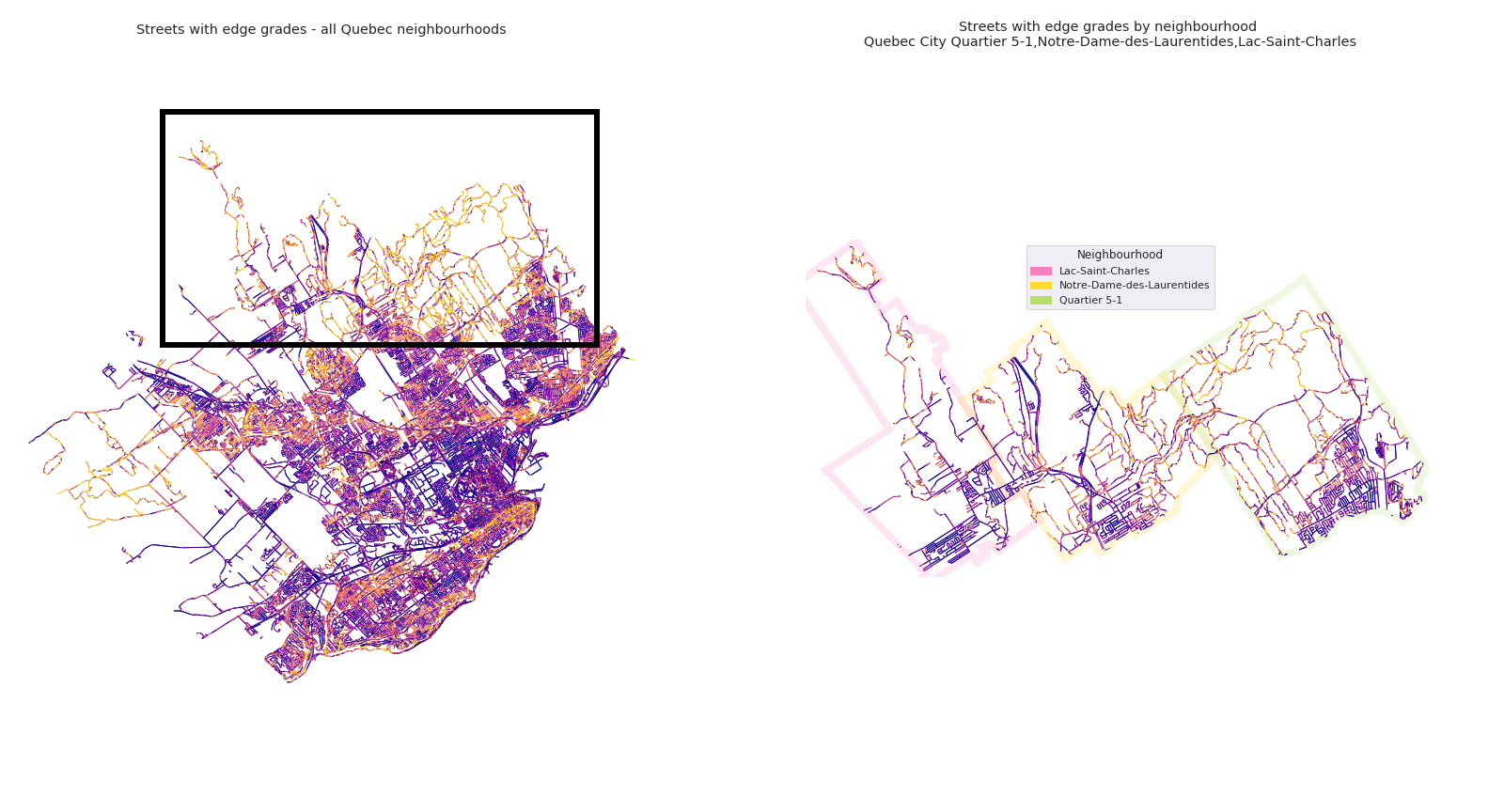 However, 2 of the top 6 steepest neighbourhoods are located near the historic part of the city which sits on top of a small hill. Saint-Jean-Baptiste ranks in at number 3 while Vieux-Quebec/Cap-Blanc/Colline Parlementaire is 6th. Although Vieux-Quebec/Cap-Blanc/Colline Parlementaire is only 6th, it flaunts some impressive cliffs and has roads that must be closed during harsh winter conditions due to their grade. It does not come up higher in the list, because it is formed of very topographically different subneighbourhoods: the Old Port and Cap-Blanc represent flat terrain squeezed between the Saint Lawrence river and the cliffs of the Upper Town and Parliament Hill which overlook the city. 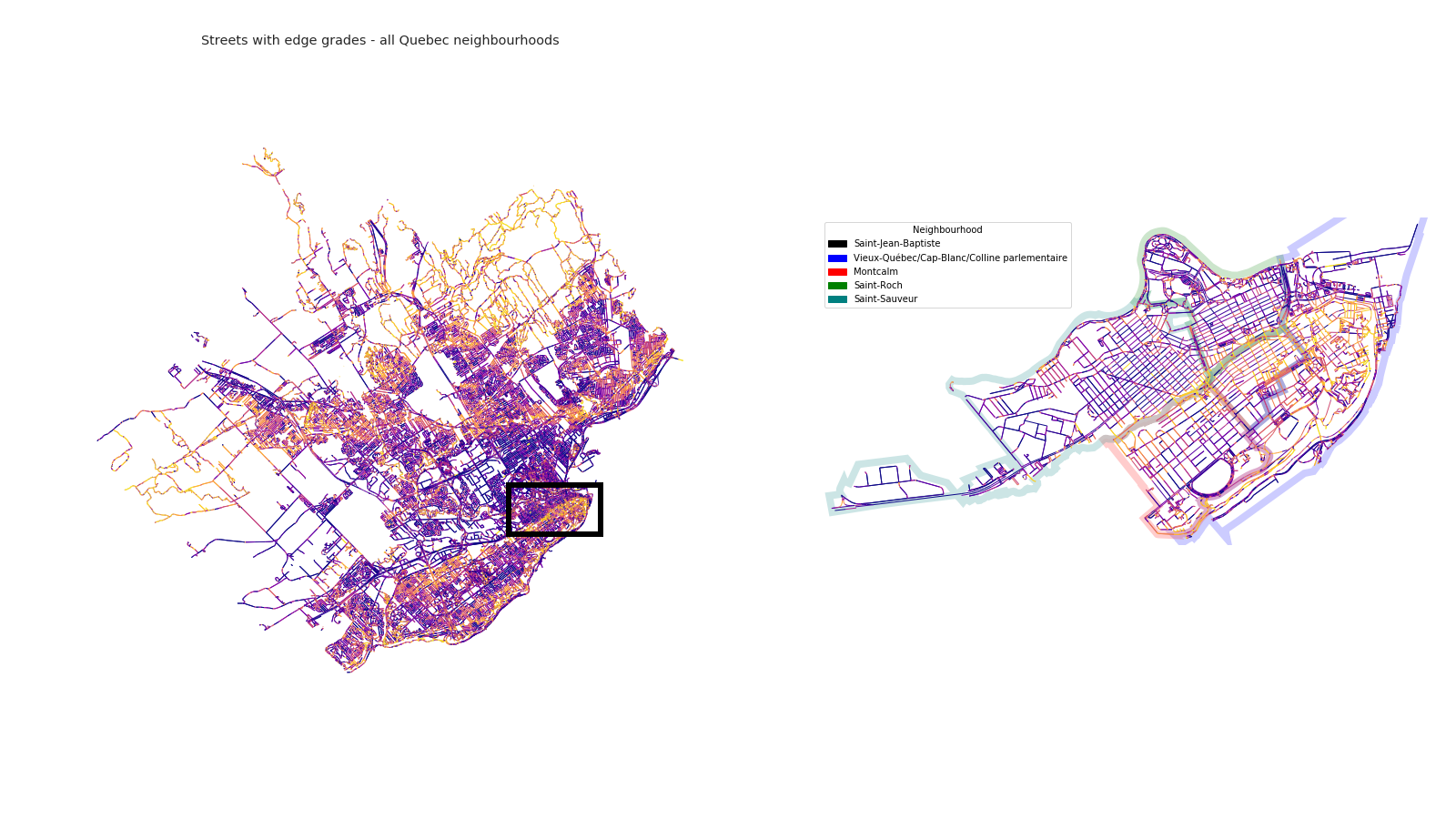 The highest point in Montreal is the top of Mount-Royal at only roughly 220 meters in the Peter-McGill neighbourhood (aka the Ghetto). It is represented in orange in the figure below. 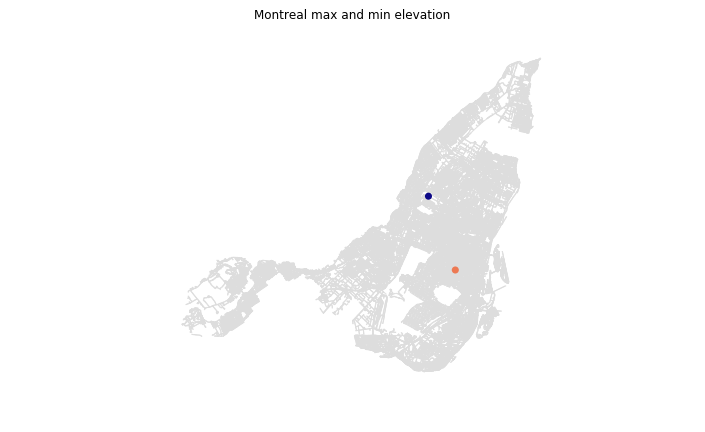 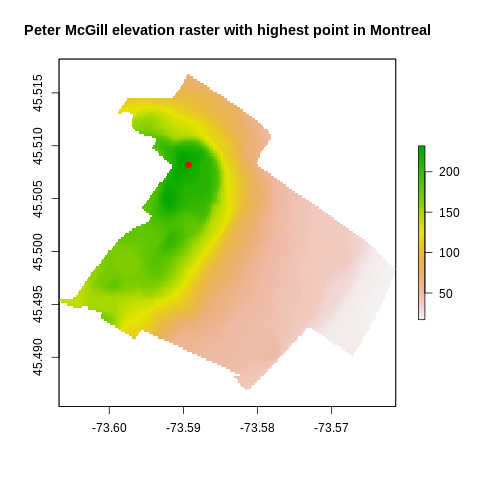 The lowest point is below sea level in Saint-Michel. Although there is no obvious reason why a specific point in that neighbourhood should have negative elevation, inspection of the raster image gives away a telltale sign of the presence of a quarry, which be easily spotted due to the clear contrast in elevation around their boundaries. In fact, this is the Francon Quarry. The mustard colored patch to the west is the now-defunct carriere Miron which has been converted to a parc after serving as a landfill. 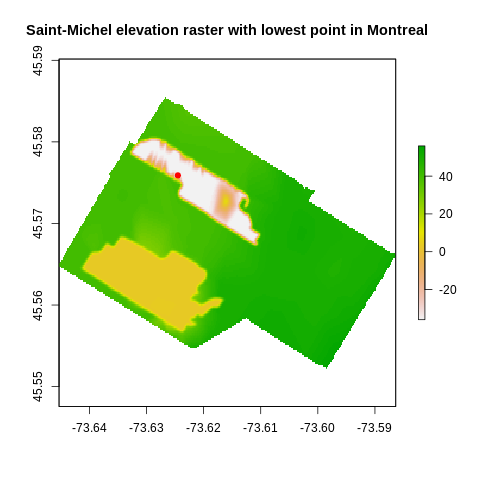 The highest peak in Quebec city, represented in yellow, is over 600 meters high. It is located on the northern fringe of the city boundary in the 5-1 neighbourhood in Beauport. 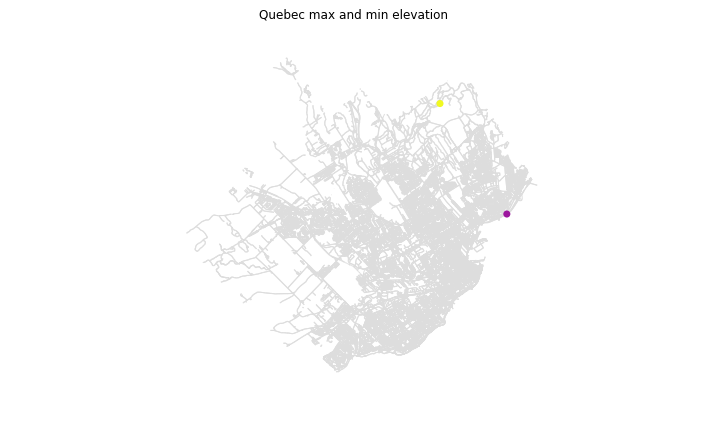 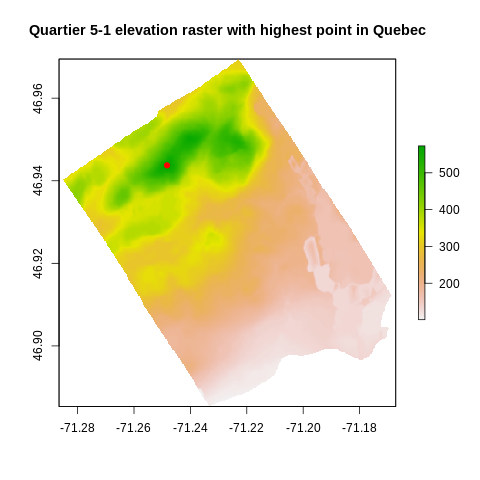 The lowest point lies on a sand bar (batture in French) in the 5-4 neighbourhood in Beauport and is below sea. It is interesting to point out that in both cases, the extrema lie only a few kilometers appart in the same borough. 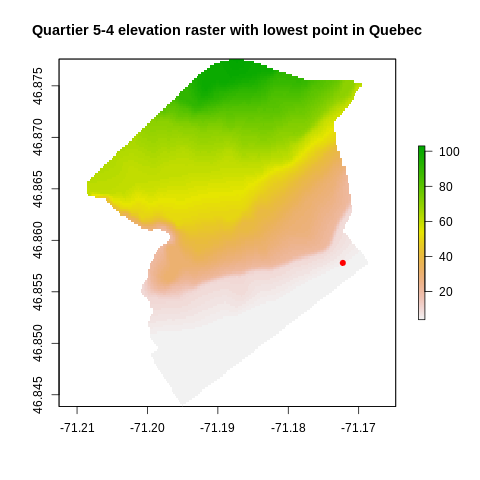 We’ve seen that Quebec and Montreal are rather different in terms of elevation and topography. Although both cities were built near the Saint Lawrence river, they have distinct geographical signatures. Quebec has grater variation in both elevation and street grades than Montreal. For Quebec, the tallest peaks can be found in less populated northern region. Nonetheless, the more densely populated neighbourhoods around the historical center also showcase important street grades. For Montreal, the hilliest part of the city is around Mount-Royal.

The following post studies geology in order to help explain some of these differences.